An elegant and beautiful classic design from the legendary Abeking & Rasmussen, well maintained and carefully owned from an experienced owner. SYLENA is now for sale and ready for her next custodian.

SYLEMA, originally launched as Seepferdchen, is one of the 100 Windfalls yachts.
The Windfalls consisted of a fleet of over 100 high quality wooden offshore yachts taken as reparations from Germany after the 2nd World War. Virtually all British service personnel who sailed offshore for the next 15 - 20 years were introduced to sailing in these yachts. As the years went on the services gradually disposed of them and they were bought by civilian owners, in due course becoming classic yachts, still known as Windfalls. Their beautiful lines still turn heads today.
The yachts were built in Germany in the 1930s to provide training for the German armed services. They were owned by the German Government and after the war were taken by the British Government as reparations. The majority were then sailed to England, where they were promptly dubbed Windfalls and initially allocated to Navy, Army and Air Force of the British and Commonwealth Services.
The yachts varied in size from 85 ft to 32 ft and included some very fine large craft. During the 1940’s the Windfall fleet was mainly condensed to three main classes: 100 square metre (sq m), 50 sq m and 30 sq m, with an overall length of 55 ft, 42 ft and 32 ft respectively. Mostly of them are now under private ownership, sailing as classic boats and much admired at classic boat rallies or Tall Ships Races.
Despite being built for use in the Baltic they have since sailed far and wide, cruising extensively and racing in most of the Northern Hemisphere offshore races including the Fastnet, Bermuda and Trans-Atlantic Races. That they were very well constructed is amply demonstrated by the fact in 70 years not one has been lost at sea due to stress of weather.
BUILDER’S HISTORY:

The Burmester shipyard was founded in 1920 by Ernst Burmester (1893–1965) in Bremen- Burg . Due to an increased demand for yachts in the 1920s, the company - from 1925 Yacht- und Bootswerft Burmester GmbH - grew considerably. In 1935, after liquidation, Ernst Burmester became the sole owner of the boatyard.
In the 1930s, the shipyard mainly built lifeboats and small boats, such as clearing boats and sea cruiser yachts for the navy . In 1941 two branch yards were set up in Swinemünde (Ostwine) especially for war production, the yacht and boat yard Burmester Räumbootswerft and the Ernst Burmester Schiffswerft KG for KFKconstruction. As an armaments factory, the Burmester shipyards also employed Dutch, French and Polish slave laborers during World War II .
OWNER’S COMMENT:

SYLENA is more than a classic good looking with a beautiful history. Built for the German cadets training of the navy in 1937, SYLENA was part of the 100 German windfalls taken over by the English NAvy after the war, then later sold to British and Dutch owners before taken over in the French seas of Bretagne by present owner. At sea it’s more than a pleasure to sail, very strong and quicker up wind and manageable alone below 20 knots of wind. Now time to contemplate a new project, bigger for family cruising and race. SYLENA's hull was perfectly epoxied as per inspected by both inspector and professional in France.

Summary of Accommodation:
• Up to 3 berths in one cabin and saloon. 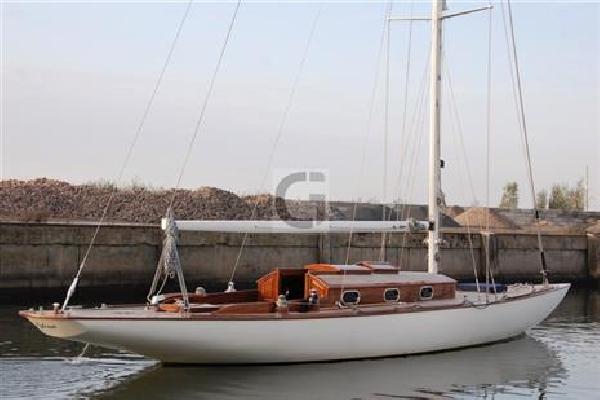