Extensively upgraded and updated example of the blisteringly fast and easy-to-sail Luca Brenta designed B38 daysailor. Huge spec and 100% ready to go.

FURTHER BROKER’S COMMENTS:
Originating from the legendary Milan based Luca Brenta Yacht Design House, the US-flagged SCHEGGIA was launched in 2005 and is hull No.9 of this popular performance daysailer line.

The Brenta B38 was designed to provide easily handled and stylish boat with minimum maintenance and maximum performance.

Ideal for local club racing (Rating – PHRF 42.0), SCHEGGIA is also CE-certified, so can be used on either side of the Atlantic. Now offered as her owner has bought larger, SCHEGGIA is seriously for sale and well-priced to attract a quick and simple sale.

The first outcome of this research into short-handed, generous cockpit, high performances and stylish yacht has been the B38. Great attention to the sailors and their search of emotions….and even greater attention to guests comfort while at sea. A clean hull shape, push button controls at steering pedestal, seating space both in the aft cockpit and forward sofa. The boat is built in carbon, with carbon rig, 65% ballast/displacement ratio, no backstay and large roach mainsail area.

RCD Status:
• We understand that the vessel complies with the European Union Recreational Craft Directive and is categorised B or C.

Deck & Superstructure Construction:
• The deck and cabin superstructure are created using the same process as for the hull.
• Teak with white caulking to the cockpit sole, side decks and foredeck – replaced 2016

General note on safety equipment: Any safety equipment such as life rafts, Epirbs, fire extinguishers and flares etc. are usually personal to the current owner(s) and if being left on-board as part of the sale of a used vessel may require routine servicing, replacement, or changing to meet a new owners specific needs. 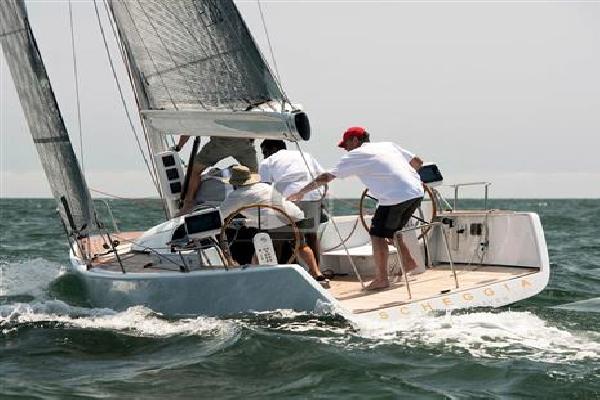