2009-launched, 2-cabin, 2-heads version of the popular Italian designed and built Comet 41S from Comar Yachts. Lightly used and is still under her first and only ownership.

OLTRE is a boat that I truly love. She is beautiful to the eye and I particularly enjoy her interiors. It is difficult to find such a level of interior finish in a 41 foot yacht. With her two sleeping cabins, two heads and a separate shower cabin, she is hard to match.

OLTRE is very fast and extremely stable. She is perfect for the those who enjoy fast and serious sailing, yet easily handled to appeal to the family sailor. Her engine has seen very little use as OLTRE is such a delight to sail, even in as little as 5 or 6 knots of breeze.

OLTRE is an elegant boat designed for those who love sailing and want a boat that is very special.

The biggest challenge with this model was to pack the substantial appeal of its bigger sisters, the 51 S and 45 S, into just 12 metres. This meant long hours at the drawing board and computer not to mention the construction of numerous 1:10 scale models as we strove to strike just the right balance between hull and coachroof. The 41 S has the beautifully unforced, performance-oriented forms we’ve come to expect from the Comar Sport series: fine bow sections and vertical overhangs, designed to develop the waterline to the utmost and make the hull soft on the waves. Although never interfering with the finely wrought proportions of the hull, the deckhouse design delivers excellent interior liveability, even allowing a choice of solutions that goes right up to three cabins and two heads. The very nippy Comet 41 S is surprising responsive and docile to wheel too, thanks to the good hull balance and rudder’s efficiency.

Fuel:
• Approximately 150 litres with gauge
• Filling of fuel tanks is through deck inlet.

Entertainment:
• Stereo radio/CD with speakers in saloon and cockpit 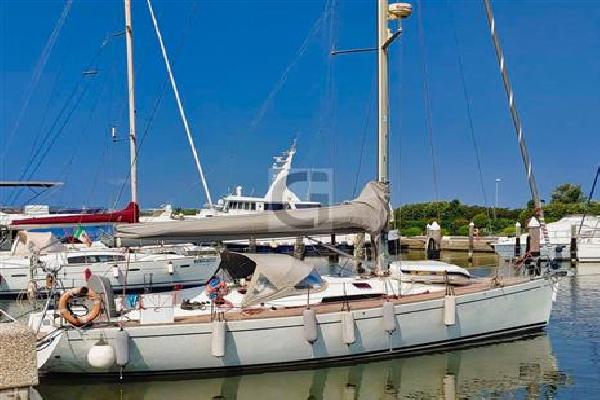