DARK SIDE is a two owner, beautifully presented and stunningly specified example of the Dehler 44 SQ, a yacht designed to be both a reliable and comfortable cruiser/racer. Based upon the extremely popular Dehler 44 design, the SQ (standing for ‘Speed’ and ‘Quality’) offers the perfect compromise between a comfortable cruising yacht and the racing performance found in the race-focussed Dehler 44 Regatta. DARK SIDE takes the performance one step further with the fitment of a performance T-keel in addition to her carbon fibre rig, PBO standing rigging and North 3DL sails, making her the ideal competitive club racer.

Easily managed by a small crew thanks to her electric halyard winch, recessed genoa furler and mainsail stackpack, DARK SIDE is also easily manoeuvred under power thanks to the larger 55hp Volvo engine fitted as standard to the SQ’ models. DARK SIDE also benefits from a very practical interior layout with 3-double cabins, 2-heads and twin full-length saloon settees.

THIS YACHTS SETS STANDARDS - In the ﬁercely competitive yacht class from 42 to 46 ft, Dehler is heralding a new era. With its Dehler 44, which is available in three versions, the highly reputed German yacht builder is launching a vessel that combines all the traditional advantages of a Dehler with a multitude of genuine innovations.
The Dehler 44 is distinguished by outstanding handling under sail, maximum safety, numerous technical reﬁnements and consummate quality.
With its futuristically elegant design inside and out, this shining example of 21st century design is a high-performance regatta vessel with maximum speed potential, and a luxuriously appointed long-distance cruiser in one. It is something unique that is waiting to be discovered!

FOR SUPERIOR SAILING PERFORMANCE AND ENJOYMENT - Dehler’s motto “when passion meets reason” has been taken literally in the many innovations present throughout this new model. The designers have succeeded in developing a yacht that unites all the core values of Dehler’s philosophy with sensational advances in technology.
Every innovation has the clearly deﬁned goal of enhancing sailing potential, safety and operating comfort to an extent unheard of even in higher yacht classes. Every detail improves handling and makes the crew’s life on board that much easier. Some examples of the innovations on-board are the recess-able spray hood, the innovative light strip “skylights“ on deck and the ﬂush design of the deck saloon windows with their hyper-modern metal frames.

A MODEL OF FLEXIBILITY - With all their creative skills, our designers have succeeded in ﬁnding practical solutions for every conceivable sailing situation.
Multi-functionality and ﬂexibility are what make the Dehler 44 distinctive. For instance, there’s the removable transom utility boxes to reduce weight and the ﬂush-storing cockpit table. These allow the stern of the Dehler 44 to be converted almost instantaneously for regatta racing.

PERFECTION IN EVERY DETAIL - Anyone boarding the Dehler 44 cannot fail to be astonished by the beautiful silhouette and remarkably clear deck of this new regatta cruiser, and by a multitude of technical details bearing all the hallmarks of Dehler. Take, for example, the ﬂush hatches from “Rondal “, the “Nomen” folding cleats and the recessed roller reeﬁng system. Finally, there’s the LED navigation lights and carbon racing winches.
For Dehler, perfection in every detail means not only top-notch technology but also top-quality materials – a principle that extends to even the tiniest nut and bolt.

THE KEEL: SAFETY BY DESIGN - For the keel, Dehler has again explored new ways. Even at the draft stage, the Simonis & Voogd team pursued the clear goal of achieving greater safety and longevity for this vulnerable structural component. The solution lies in the ingenious mounting of the keel. The keel of the Dehler 44 is not simply ﬂanged onto the ship’s bottom but is recessed by up to 300 mm into the hull’s interior. The high forces to which it is exposed are thus discharged into the yacht’s sturdy bottom structure. With the aid of the latest FEA calculations, the design has been optimised and dimensioned to perfection. All the keel variants of the Dehler 44 have one thing in common: Because of their extremely low centre of gravity, the boat is exceptionally stable. This, combined with the vessel’s low weight, is the key to the speed and ﬁrst-rate sailing characteristics of this unique yacht.

TOP SOLUTIONS FOR TOP PERFORMANCE - To make the top-class sailing characteristics of the Dehler 44 possible, numerous studies and analyses were called for. 34 models were thus developed for the bow area of the hull alone, the outcome of which is a steep bow that slices smoothly into the waves with little loss of speed. By using the latest design software, its performance has been fully exploited with optimum dimensional stability. This, and efﬁcient components like the low COG keel and a narrow, deep rudder are an assurance of rapid acceleration, high speed-potential and outstanding manoeuvrability. The rudder is balanced to permit ease of steering with little rudder pressure in all conditions.
Despite its outstanding performance, safety is accorded top priority on the Dehler 44. The yacht has an extremely high angle of vanishing stability of about 140°. This means exceptional safety, even in extreme situations.

THE YACHT FOR THE 21ST CENTURY - The Dehler 44 is not only fast and slim, but is also an extremely beautiful yacht, both inside and outside. Its three versions are just right for every taste and need. The “Dehler 44“ is the most basic model available; The Elegance interior comes as standard in mahogany, although the yacht is also available in the teak Avantgarde variation. The “Dehler 44SQ“(S for speed and Q for quality) is technically even more reﬁned. Both versions are ideal for long voyages. Finally, the “Dehler 44 Regatta“ is the racer with a selection of sails geared entirely for top performance.
In short, what all three yacht versions each with their two interiors, have in common is their unique blend of design, quality and safety.

With some 22,000 yachts under its belt, Dehler’s experience stretching back almost 45 years sails with you. And ﬁnds expression in a unique yacht that is setting sail into a new, great adventure. Dehler - “when passion meets reason“

Above extracts are taken from Dehler 44 SQ brochure

PRESS REVIEWS:
Dehler's penchant for performance shows in the lines of the Dehler 44, with its fine entry, powerful body plan aft, and deep fin keel. It also has, by current standards, relatively modest beam, but that doesn't appear to have handicapped the designers when it came to providing the boat with a three-cabin layout with the customary comforts and necessities.

Decked out with a battery of winches, twin carbon-fibre steering wheels, flush hatches, and "light strips," the boat presents a stealthy, aggressive mien to its competitors on the race course while bathing its crew with a warm ambience below in which to celebrate the day's activities topside.

The Dehlers 44's appearance alone will make fellow Tuesday-night racers wish they'd stayed home to watch CSI. Invite them aboard after the race and, seduced by their surroundings, they'll forgive all that passed before.
Cruising World.com – mini review by Jeremy McGeary September 12th 2007

RCD Status:
• Our understanding is that the yacht is built in accordance with CE Boat Category A-ocean.

Keel & Rudder:
• Performance keel with lead torpedo bulb.
• Keel recessed by up to 300 mm into the hull’s interior. The high forces to which it is exposed are thus discharged into the yacht’s sturdy bottom structure.
• GRP balanced spade rudder blade.

Communications Equipment:
• Raymarine VHF with DSC with loud speaker at the chart table and in the cockpit.

Entertainment:
• Stereo CD/radio system with speakers in saloon and waterproof speakers in cockpit.

Saloon:
• Steps lead down from the companionway.
• Grey coloured Alcantara upholstery to the saloon seating.
• Extendable table positioned with raised fiddled to port with a U-shaped sofa and further sofa positioned opposite on the starboard side.
• Storage cupboards.
• Hull port holes.
• Speakers.
• Blinds to hatches and high-level port holes.
• Downlighters.
• Metallic panels in the saloon replaced – 2018.

SAFETY EQUIPMENT:
General note on safety equipment: Any safety equipment such as liferafts, Epirbs, fire extinguishers and flares etc. are usually personal to the current owner(s) and if being left on-board as part of the sale of a used vessel may require routine servicing, replacement, or changing to meet a new owners specific needs. 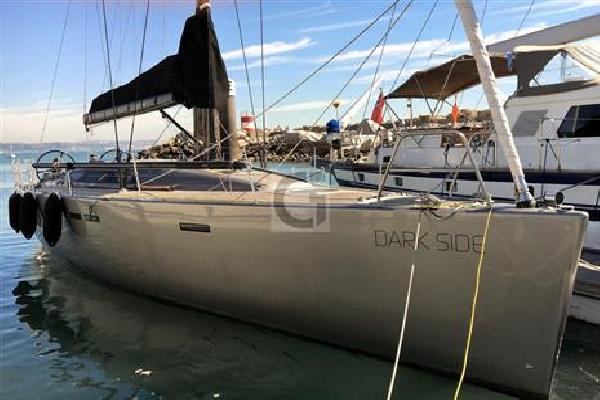