Striker aluminium offshore sportfishing boat designs originate from Thomas de Groot of The Netherlands. Over 10 Striker 50's have been built since 1979 across three variants, the Series 1, the Series 2 from 1987 and more recently the Series 3. BRINOCO is a Series 2 Striker 50 constructed by the legendary Heesen Shipyard in Holland with an original build price of circa US$1.2m.

The Striker 50 has a tournament style cockpit and one of the best foredeck and side deck layouts found in any yacht of her type. This offers her much greater space then most boats built today. Safety at sea is also unrivalled thanks to prominent guardrails and a large walk-out pulpit strong enough to carry two fisherman.

The Striker 50 is a semi-planning hull that offers very good rough water performance. Striker's are known to be able to fish while other boats wait it out making them idea of the tournament circuit, long range cruising and Island hopping.

The Striker is a proven hull with 50 years of service in the pleasure and commercial industry through-out the world. Having been built by qualified builders in the USA, The Netherlands, Norway, Spain, Australia, New Zealand, South America.

In addition to her original Heesen build, BRINOCO also benefitted from a US$250k refit at the renowned Haakvort Shipyard in Holland. Alongside Heesen, Haakvort were originally builders of Striker 58’, 61’ and 70’ sportsfishers with 14 built between 1981 and 1988. This refit included a complete redesign of BRINOCO’s saloon area and a full refit of her flybridge systems.

Powered by twin MTU 1,000hp V12’s and coupled with a light-yet-sturdy aluminium construction, BRINOCO offers true ocean performance, an essential component of a serious offshore sportfishing yacht. Not to be confused with any GRP boat, BRINOCO is now available at a fraction of her potential rebuild cost and is located in one of the finest sportfishing grounds on this side of the Atlantic Ocean.

Striker boatbuilding activities were initiated by one Herbert R. Phillips in 1951 on Long Island, New York U.S.A. building steel skiff-type sportsfishboats based upon a developable surfaces idea of Phillip Bolger, in 1954 Phillips moved with his business to Pompano Beach Florida and after having built a small number of boats there, he sought to have the boats built elsewhere and in 1957 initiated that Groningen in The Netherlands and became the birthplace of about 50 up to 33ft. long steel STRIKERS with open bridge, twin Ford diesel engines and an accommodation for four; in the early 60's marine aluminium alloy, thanks to ALCAN'S Banbury UK laboratory, emerged as the material in all welded construction to challenge successfully steel { corrosion} and fiberglass {weight} and from 1961 on it has been all along STRIKER Diesel Aluminium and continuous series have been produced in sizes 33, 35, 37,39 , 41, 44, 50, 54, 58, 62 and 70 ft. sportfishing boats, while other sizes are currently researched and developed.

In 1983 Herbert R. Phillips has transferred all his rights to the registered STRIKER tradename, the STRIKER logo as well as the STRIKER fish to Thomas de Groot- who joined Striker way back in 1957 and who has already in 1966 taken charge of research /design/ development and has been doing the designing and developing computer aided of all versions and sizes of Strikers ever since exclusively worldwide under the name of De Groot Paterswolde B.V. and Striker Boats International Ltd.; Herb Phillips to-date operates as a general brokerage company in Ft. Lauderdale, Florida, U.S.A. De Groot Paterswolde B.V. and Striker Boats International Ltd. have so far brooked that Phillips can trade with Striker boats in the USA.

In 1974 alongside the STRIKER sportfishingboats ranging from 35' to 70' which were built in Holland, Spain, Norway, S. Korea, Chile a series of 44 and 54 Ft. STRIKER pilot and surveillance was started in Norway with Kvaerner} Fjellstrand on a license basis. Thirty 44' pilot-boats, one 44 ambulance-boat, two 54 navy surveillance crafts mainly for use up the Norwegian-, German and Dutch coast; in 1977 a series of seven 54' pilot-boats were built under license in Australia and eight 37' pilot-vessels and a couple of 30'-ers, all operating as pilot-boats, custom launches, etc up the Australian coast; in 1984 a license has been established in New Zealand building pilotboats/ fishingboats for the New Zealand region, and following a license is established in Australia and a line of patrol-boats is developed for operation i.a. in Australia region.

RCD Status:
• Our understanding is that the yacht is exempt from with Directive 94/25EC (Recreational Craft Directive) as she was first placed into use with EEA waters prior to June 1998. 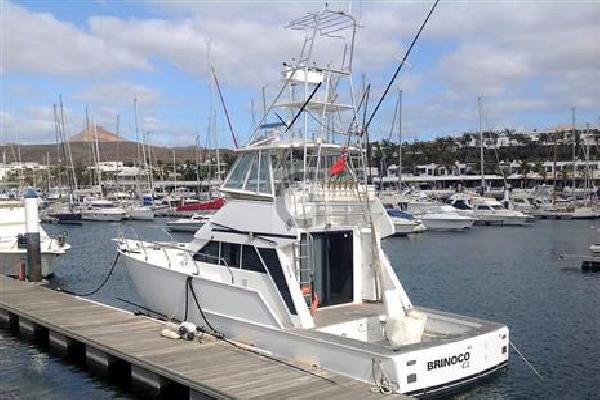