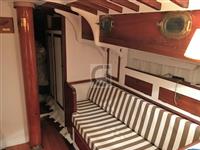 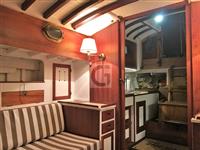 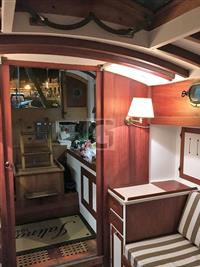 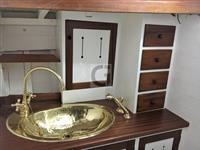 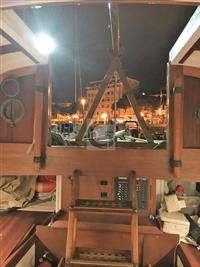 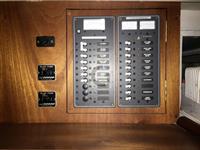 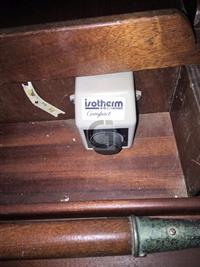 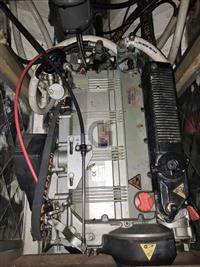 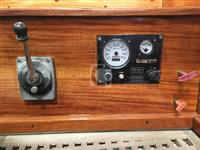 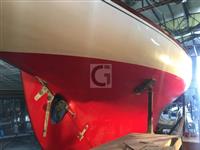 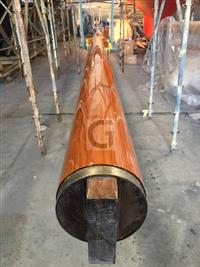 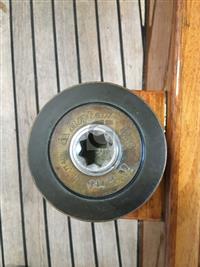 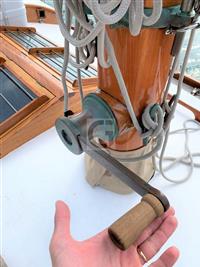 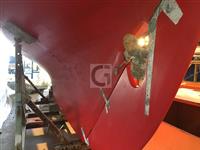 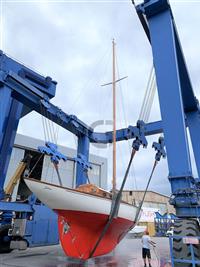 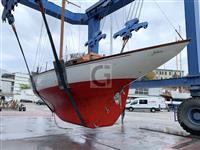 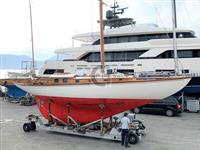 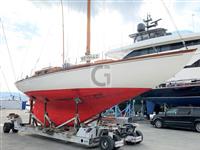 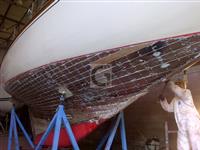 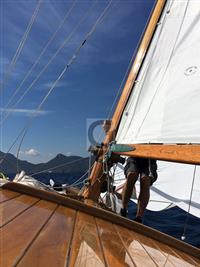 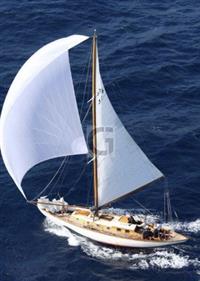 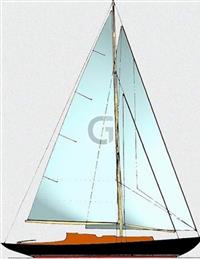 Beautifully restored of one of the most winning Canoe Shape design from Eugene Cornu, JALINA represents a beautiful turn-key solution for who is looking to get into the classic regattas circuit with a winning boat.

“Un magnifique animal de course” this is how, in 1953, the French magazine Le Yacht described JALINA, born from the pencil of the established French designer Eugène Cornu.

At the time the boat had already shown how much it was worth, winning in 1947 the Cowes-Dinard and the Cannes-Portoferraio.

In 1953 he won the first Giraglia, repeated in the two following years in his own class. Other victories were won by Porto Azzurro-Anzio in 1955 and at Ajaccio-Monaco in 1957.

The originals designs from Mr. Cornu are now held in the Musee National de La Marine in Paris as JALINA was one of the first sailing boat to gain victory in some of the most ambitious regattas against the English boats.

JALINA was bought by her current owner in 2007 and she has been completely restore in Elba Island from Bonacina brothers between 2007 and 2010. Her highlights include:-
• Khaya mahogany construction
• Structural teak deck
• One cabin layout with one head
• Full list of Zaoli Dacron racing sails from
• ORCI GPH 668,7, done in 2017 with a scanner measurement
• CIM APM 212,9

JALINA is now for sale as her owner already embark on a new project and wish to find a passionate sailor who would like to take care of this beautiful boat.

“He spent his childhood in Nantes. His uncle, who works at Chantiers de l'Atlantique in Saint-Nazaire, teaches him to draw hulls. In October 1919, he joined Nieuport, a pioneer of aeronautical construction, near Paris. On February 1, 1923, he was hired by Paul Jouët at his shipyard in Sartrouville.

He worked much before the Second World War on regatta dinghies, and after the war turned on cruise ships in collaboration with the Jouët shipyard in the Paris region; from there was born the famous Beluga (weighted dinghy of 1943). This is the real beginning of his career.

From 1942 to 1957, he designed a dozen models whose hulls are made of wood, as well as light dinghies.

From 1946 to 1958, the Jouët shipyard launched at least a dozen boats designed by Cornu, including one on which Jacques Brel learned to sail, and at least six pleasure boats. On the other hand, built by the Pichavant shipyard, apart from the Belouga, the Seagull and other successful series, we owe him 14 sailboats and two stars. Aquarius is one of the Norwegian rear ketch produced by this shipyard.

After his death, his archives were deposited at the Naval Museum, which has about 130 of his plans.

The 470 Olympic dinghy (produced more than 18,000 copies) also bears the Cornu signature, but it was designed by André Cornu who is none other than the first cousin of Eugene Cornu.".

A BRIEF OF THE BOAT HISTORY:

Jalina collects victories in a classic of the time, the "Cowe-Dinard", followed by a subsequent victory in the "Cannes-Protoferraio". At the turn of the 1950s, victories and placings continued in the main Mediterranean regattas for Jalina. In 1953, on the occasion of the first edition of the Giraglia, Jalina participated helmed by her owner, Monseur Jaques Barbou in the role of skipper: at the end of the 196 miles, Jalina arrived in Sanremo victorious, putting almost 7 hours of separation between the famous and performing Derrida. In 1954, again with skipper-shipowner Jaques Barbou, this time accompanied by his wife Eliane, Jalina won again the victory of the second edition of the Giraglia.

Jalina's crew was so formed: Monseur Barbou and his wife, Monseur Roger Breasange, Dr. Marcello Felloni of Sanremo and the sailor Francois. In 1955, for the third edition of the Giraglia, Jalina stands out taking second place. In 1958 Jalina wins the Ajaccio-Monaco. Still at Giraglia, Jalina remains at the height of his fame: third place in the '59 edition, fourth in the 1960s (at the helm the new owner, Monseur Jaques Legre), seventh place in the '64. Jalina continues to stand out on the main racing fields also with the third owner, Monseur Maurice Legris, until the mid-1970s.

It was in 1975 that the fourth owner, Monseur Andre Hardy, decided to transform Jalina into a quiet pleasure craft: tree, deck and interiors were replaced and Jalina "adapted" to her new life, characterized by quiet coastal cruises. In 1982 Jalina sees a new owner, Monseur Philippe Mazella, come on board, confirming the cruise use. It was 1987 when the new owner, Mrs. Petra Wolker, deeply in love with Jalina, decided to elect her as her own home. Despite the now cruising sailing plan, Jalina helmed by the new skipper-owner, manages to earn an honorable fourth place at the Imperia Vintage Sails Rally in 1989. Since the late 1990s, Jalina is awaiting restoration work at a construction site on the island of Elba.

In 2007 was bought by the current owner who did a complete restoration from 2007 to 2010. All the originals drawings and photos were collected in order to restore the boat with her original design from and Marco and Stefano Bonacina that bring the boat back shining as she is today.

1953
1st place at the 1st edition of the Giraglia race

1954
1st place at the 2nd edition of the Giraglia race

Entertainment:
• No amenities, you can feel the beautiful wood construction around you and enjoy the sea

Summary of Accommodation:
• Up to 4 berths in one double cabins plus saloon.

Accommodation layout:
• There is one forward cabin with head. Aft port and starboard with bunk beds.
• The galley is on the starboard aft side of the salon.
• Aft to port still in the salon is the navigation chart table area. All switches and electronics are mounted in this comfortable forward facing area.
• Through the main bulkhead to the salon

General:
• Double guardrail and steel stanchions
• Window on the cockpit

Enter your details below to receive our monthly email newsletter and further news on upcoming events and services.

You can find out more about which cookies we are using or switch them off in settings.

This website uses cookies so that we can provide you with the best user experience possible. Cookie information is stored in your browser and performs functions such as recognising you when you return to our website and helping our team to understand which sections of the website you find most interesting and useful.

Strictly Necessary Cookie should be enabled at all times so that we can save your preferences for cookie settings.

If you disable this cookie, we will not be able to save your preferences. This means that every time you visit this website you will need to enable or disable cookies again.