Simply epic performance cruiser from the legendary Maxi Dolphin, Luca Brenta and Steve Huish in an evolution of the iconic MD65. Launched 2010 with numerous updates on the original design in the pursuit of style, performance and easy of handling.

A continuation from the Maxi Dolphin semi-custom MD65 line, ADASTRA, a custom Brenta MD66 was designed by Luca Brenta and launched in 2010 as the perfect example of the true synergy between the high quality build of Maxi Dolphin and the design ingenuity of Luca Brenta.

The layout of ADASTRA features a ‘boat owner’ style in the arrangement of the environments, while the décor carries the hallmark of minimalism played on white and on few essential elements of dark timber. As to the interior design, the area at prow was completely innovated and features a real suite in which the double-bed is placed with the headboard towards the prow. Also the central area stands out from the earlier MD65. The chart table and the kitchen (connected with a crew cabin lat stern) are located in two closed rooms, separated from the living room. This way a refined living room with the dining area on the left and a long couch on the starboard side was created. At stern there is the only twin bed room intended for the guests, equipped with a large bathroom.

"Beauty? It’s something that makes you feel good, therefore something very individual. To me it means order, harmony and sharing. No beautiful thing makes sense if you cannot share it with others". With this vision, along with his passion for the sea, boats and nature, in 1987 Vittorio Moretti created the Maxi Dolphin boatyard.

Hull Construction:
• Hull built on male mould, with SP system SE84 epoxy pre-preg composite materials including carbon, Kevlar and E-glass with Corecell core sandwich
• The hull is post-cured at controlled 85 degrees temperature ensure the stability in time of the laminate.
• Main structural elements are put into place at the time of moulding to ensure easy mounting of the bulkheads, pre-built on moulds.
• Hull spray painted in silver - 2015
• Hull topsides vinyl wrapped white - 2018

Other Electrical:
• 220v shore power with isolator and circuit breaker


Summary of Accommodation:
• Up to 8 berths plus crew in forward master cabin and two twin aft cabins. 3 guest heads plus further crew heads. 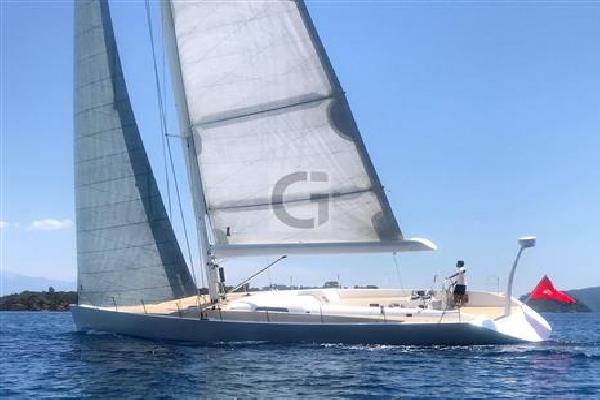