Originally launched in March 1998, WHY NOT is a three-owner twin-cockpit example of the extremely popular German Frers designed Nautor Swan 56. Extensively refitted in her current ownership, almost every aspect of her build and inventory has been reviewed, overhauled and improved from her purchase in May 2007 at Nautor’s Villfranche facility.

“Nautor's new Swan 56, available as either a cruiser/racer or regatta model, is a powerful and elegant statement from one of the world's premier sailboat builders. Designed by German Frers, the Swan 56 demonstrates Nautor's renewed commitment to performance, while maintaining the essentials of structural integrity, seakindliness, comfort and safety that have earned the company an enduring reputation among demanding sailors the world over…

…Swans have always been capable upwind boats and the 56 will be no exception. Her bow features the requisite small-entry angle for speed by waterline but she also has enough of a rake to assure a clean entry. There is sufficient forefoot area to reduce pounding in a chop. The wide stern has just a trace of counter to keep the trailing edge out of the water. However, the 56's forte, like most performance boats today, will be quick planing and blazing off-the-wind speed. Both versions of the 56 are based on the same hull shape, which carries the beam well aft, although the keel sections are different. The standard, loaded draft of the cruiser/racer is 9 feet, while the regatta's loaded draft is a shade more than 11 feet, which should keep even the most laid-back sailors on their toes. The interior, deck and sail plans also reflect the differences between the two…

… once you negotiate the ladder, there is little to dislike about the 56's interior. From the light Burmese teak veneers, to the elegant curved teak moldings, to the well-thought-out layout, the interior is stunning, in the classic, understated Scandinavian way…

…Bringing the boat up, we managed 6.8 knots without stalling at 30 to 35 degrees apparent. There was a modest bay chop, and I was impressed by the lack of any noticeable pounding up forward. There is no disputing that today's long waterlines are fast, sometimes dramatically so, yet often there is a trade-off in upwind motion. It seems Frers has found that elusive balance between speed and motion when sailing on the wind. We were anxious to crack off on a reach and put a wave under the quarter. Unfortunately, there just wasn't enough of a sea running and we didn't have enough sail to get the boat on top of the water. Still, we clipped along at 7 and 8 knots consistently.

The Swan 56 lives up to its promise. It was intelligently conceived and beautifully finished. I have a suspicion that in a few years' time, we will be calling the 56 the latest Nautor Swan classic.”
Sailing Magazine – November 2008

RCD Status:
• Our understanding is that the vessel is exempt from the Recreational Craft Directive as she was first placed into use prior to 16th June 1998.


Summary of Accommodation:
• Customised interior plan with two guest cabins aft, owner cabin and focsle.
• Two guest cabins aft - starboard aft cabin has double bed and the port cabin has twin beds (upper and lower).
• Aft companionway leads from aft cockpit to the starboard aft cabin.
• There is a connecting door from the starboard cabin to the port one.
• Each cabin with lockers and stowage.
• From the port side aft cabin a door leads forward to the galley
• Fully equipped galley including cooker, fridge, freezer, lockers, drawers etc.
• From the galley inboard a door leads into the engine room.
• From the starboard aft cabin a door leads to the aft toilet / shower compartment – from which a door leads out forward to the chart area / saloon.
• Forward facing chart table with seat, drawers, stowage and chart locker above.
• The main companionway from the central cockpit leads down on the centre line to the aft area of the saloon between the chart table and galley.
• Saloon with sofa on port side and lockers outboard - to starboard is an L shape sofa and a dining table, removable chairs fit on the centreline.
• Lockers outboard to starboard.
• The owner’s cabin is situated forward of the saloon over full width and has a double bed set to starboard, lockers and wardrobe to port.
• Forward is an ensuite head area with wash-basin and to starboard is a separate shower unit.
• There are two pipe-cot style berths in the forward “fo’c’sle”. Under the berths is sail stowage.

Accommodation Finish:
• The teak interior was re-varnished in 2005 by Nautor service yard.
• Two series of covers for dinette, sofas and chairs. 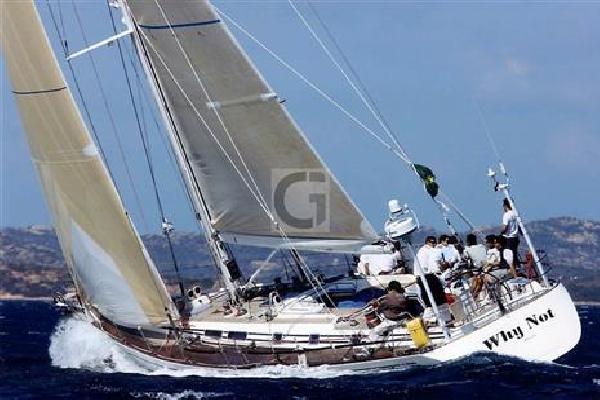