PLEASE NOTE- JESSIE MARIE is not CE compliant having been originally built for the US market. She is therefore not available to purchase within EU waters, or by EU citizens wishing to keep her in the EU’s waters.

JESSIE MARIE has been extensively re-fitted and updated by her seller in recent years and which just adds to her very high-quality original build she enjoyed at the hands of the legendary Ta Shing Shipyard in Taiwan, who have been renowned for building such yachts since the yard was established in 1957. With her hand-laid GRP hull, encapsulated elongated fin keel and adjoining trailing rudder, an easily handled cutter rig combined with the beautiful teak interior joinery, she will surely make for a wonderful sea-kindly comfortable cruising boat. JESSIE MARIE has enjoyed two recent re-fits, one in 2017 and the other in 2018, which are listed below in the seller’s comments. In only her third ownership she is now ready to take her fourth owner on many ocean voyages if required or coastal hopping if that is preferred.

“Rarely does a truly spectacular boat come on the market and Jessie Marie is definitely one of those boats. Current owner purchased her in March of 2016 from her second owner to participate to the 2018 Golden Globe circumnavigation race, unfortunately he was afflicted by a lower back condition during the summer 2016 Atlantic crossing that caused him to withdraw from the race.

She spent the first 23 years of her life in Chesapeake Bay as a one owner boat. The second owner, purchased her in 2010, cruised her to the Bahamas and in Florida. The boat reached the current owner in pristine condition, and has significantly improved in his ownership. The boat has no history of osmosis. Has copper clad epoxy finish applied in the 90’s.

She was re-fitted and upgraded in Florida in April of 2016 with an eye to the race, making her a world class blue water boat with systems and backup systems that are essential and engineered beautifully, she is ready to circumnavigate in comfort and safety several times. There are invoices in excess of 60,000 US$ for gear and in excess of 30,000 US$ for labour dated between April and May of 2016, available for inspection.

She underwent a second major refit in 2017, when teak deck was removed and all deck fittings re-bedded on a gelcoat antiskid surface, mast removed stripped and repainted, and the deck plan was redesigned with new and upgraded hardware, all tracks were changed and two new ones added. See below for 2017 re-fit.

The Sail inventory is as varied and as good as possible. The woodwork is done to heirloom standards.
Jessie Marie would cost a lot to replace and is very sensibly priced for a new owner that wants to sail oceans, cover miles in safety and comfort. The discerning blue water sailor, looking for a safe, strong, seaworthy, exceptionally fitted and maintained blue water boat should have Jessie Marie. She is the Ideal plug and play boat for a serious cruising couple.”

“These were designed by Robert Perry. Tashiba is the first in our line of Ta Shing designed and developed yachts, a line of lovely, traditional cruising sailboats.”

The Ta Shing Shipyard was established in 1957 with, to quote their website; “Let the owners’ dreams come true.”

Once again, to quote their website; “Ta Shing is an experienced and fully customized boat yacht OEM builder, the boat building experience from Shing-Sheng in 1957 and has constructed more than 1,200 boats. The Models been built include Sailboats: Mason, Tashiba, Taswell, Sky, Mystic, Norseman etc, and now building Nordhavn motoryacht/motorsailer.”

They are renowned for hand crafting using high quality materials such as Burmese teak for much of their yachts’ interiors (the quality of-which is a particular feature of the Taswell brand) to create strong, comfortable and easily managed yachts comparable with brands such as; Najad, Halberg Rassy, Malo and Contest.

PRESS REVIEW:
“Overview
Introduced in 1986, the Tashiba 36 along with its smaller sibling the Tashiba 31 are the last of the full keel double-enders by designer Bob Perry; he considers them his best. The boat shares many of the innovations Perry made with his Baba 40 design and evolves them further to produce a boat with traits all sailors love. They are fast, close-winded, stiff, and well balanced.
The boats were built by Ta Shing, the best of the Taiwanese boatbuilders and recognized as one of the best quality yards worldwide. Some have described the interior of the boat as a piece of fine furniture.
History
The Tashiba 36 heritage is intertwined with the Baba line of boats. It’s said the name “Tashiba” is probably a play of words, bringing together the name “Ta Shing” with “Baba”. These boats were the brainchild of developer Bob Berg who brought together Perry and discovered the boatyard that was to become the best in Taiwan. The three boat line-up of the Baba 30, 35, and 40 became a hit.
The last of these boats, the Baba 40, eventually got renamed to the Tashiba 40 when Ta Shing took over the marketing and decided to forge ahead with their own line of yachts. Two smaller boats were required to fill out the new Tashiba line.
Having designed the entire Baba line of boats, Perry was the natural choice for the two new boats that became the Tashiba 36 and the Tashiba 31. They were designed together in California with Ta Shing’s Taiwanese representative working closely with Perry.
The Baba/Tashiba 40 having been derived off the lines of the legendary Valiant 40 performance cruiser showed such a marked improvement from Perry’s earlier full keel designs he decided to evolve the design further. Perry writes, “The turn to the bilges got even more firm for increased stability. The bows were finer”. The resulting design produced a boat that sailed incredibly well; fast and close winded enough to challenge many fin keel designs.
Construction
The boat’s hull is of hand-laminated fiberglass. The outer layers employ water and hence osmosis resisting vinylester resin. The interior of the boat is optionally lined with polyurethane insulation. Ballast is a single iron casting encapsulated in fiberglass.
The deck is in GRP and cored with end-grain balsa. In areas where through-deck fittings are bolted, marine-plywood is used as coring and stainless-steel backing plates are used.
Variations
The boat was offered in a pilothouse version as well and the standard rear cockpit model. Rear cockpit models have a large stateroom forward and a quarter berth aft whereas the pilothouse has two large staterooms, one forward and the other midship. The pilothouse has an inside steering station as well as the pedestal steering from the cockpit. Both versions feature a pressurized hot water system with a shower in the head area.”
Taken from an extract in Blue Water Boats by W L updated on 20th July 2015

RCD Status:
• Our understanding is that the yacht having been originally built prior to 16th June 1998 for the US market, is not built to CE compliance and as such is not available to be purchased by EU citizens if she is to be used within the EU.

Hull Construction:
• The hull is of hand-laminated fiberglass.
• The outer layers employ water and hence osmosis resisting vinylester resins.
• The interior of the hull is lined with polyurethane insulation.
• The cabin superstructure and deck is in GRP and cored with end-grain balsa.
• In areas where through-deck fittings are bolted, marine-plywood is used as coring and stainless-steel backing plates are used everywhere.
• Moulded non-skid on cabin superstructure, gel coat base antiskid on deck.
• Toe rail, cockpit seats, coamings and grating all in teak.

Battery Banks:
• Service batteries comprising 6x 6v T5 190 Ah AGM batteries (4x batteries in bilge just aft of the mast, 2x behind engine replaced - May 2016.
• The two groups can be combined or isolated with a dedicated combiner located in the wet locker in front of the chart table. A separate combiner on chart table combines house and start banks together.
• Engine start Battery is a series 27 AGM battery replaced - 2017.
• All banks are mounted on custom built supports, securely fastened and vented.

Summary of Accommodation:
• Up to 6 berths in 2-cabins inc. the saloon and one heads located to the starboard forward side.

Accommodation Description:
Sleeps six: two in the forward cabin, two in the starboard aft quarter bed and on the saloon settees.
The port settee can be expanded sideways and is equipped with a lee cloth, making it a fantastic pilot berth. The foam in all settee cushions was changed - September 2016.

The Forward cabin features a queen V berth with a custom fitted mattress, abundant storage in the surrounding teak cabinetry, under drawer storage and a teak hanging locker to port. Aft and starboard is the head, with a stall shower and Formica counter vanity with a stainless sink. Ample storage in teak lockers and in drawers plus the mirror / cabinet. The impressive salon is arranged with a single settee to port and an L shaped settee to starboard, completed by a starburst inlaid teak table. Storage space is plentiful in elegant teak cabinetry throughout the salon. Aft and starboard is the wet locker with floor drain. Forward facing chart table and the roomy quarter berth. Opposite the chart table is the Keyhole style galley, with Formica counters, double stainless sink, top and front-loading refrigerator, and the princess propane stove protected by a crash bar. 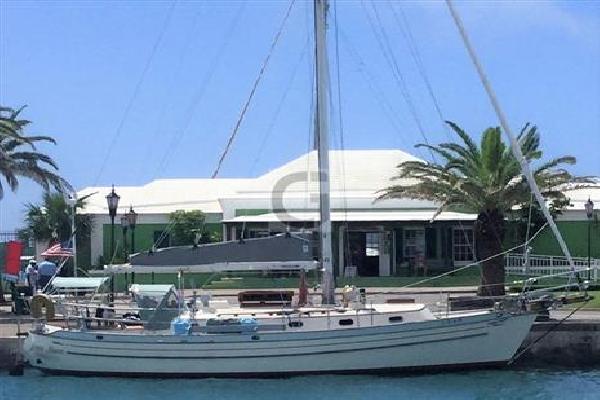