Grabau International is delighted to announce that the 1989-launched Jeanneau Trinidad Custom Ketch ‘KORALIA 3’ may now be inspected ashore near Athens, Greece.

Full custom Jeanneau-built ketch-rigged deck-saloon. Derived from the legendary Jeanneau Trinidad. Fitted out for bluewater adventures, maintained to Lloyd’s specifications and presently coded for use as a sail-training vessel.

Originally constructed as hull no.67 or 72 Jeanneau Trinidad’s, KORALIA 3 was delivered to her first owner in Spring 1989 having been extensively modified by Jeanneau to serve as an ocean racing yacht. Modifications included a lengthened hull, deeper 3m keel, longer 2.6m rudder, 1.5m taller main mast, 0.75m taller mizzen mast and racing-orientated interior forward of mast. Taking full advantage of the IOR rule of the time, KORALIA 3 was one of the quickest boats on the water and to this day, she will sail higher and faster upwind than many equally sized modern yachts.

Upon purchase by her current owner in 1999, her forward interior layout was updated to the same luxurious level as her main accommodation. This was supplied by the Jeanneau factory who shipped a complete matching forward section to be installed. Following a comprehensive refit and upgrade, KORALAI 3 was finally relaunched in 2001 to begin her new life as a luxury charter and sail training vessel.

KORALIA 3 is a blue water cruising yacht that has proven her pedigree. She has been sailed across the Atlantic twice back and forth to the USA. She has 2 trips to the UK from Greece, one to the Scottish Island around the Clyde and a second trip to the South coast. She has sailed the Mediterranean from Malta to Croatia.

The yacht is Ketched rigged, she has 8 sleeping berths. When sailed she is capable of logging 200+ miles noon to noon. Her onboard fluid capacities make her a desirable long-distance cruising Yacht, while her sailing pedigree moves her into the performance category of yacht sales. Her extensive deck gear and sail inventory maker her ready to sail away.

KORALIA 3 is a custom Jeanneau ketch. She was built in 1986 and is a modified version of the Jeanneau production yacht, Trinidad. She has had 2 owners. We purchased the yacht in 1999.

This is a blue water yacht, her liquid capacities and layout make her an excellent long-distance sailor and superb sea yacht. She carries 1400 liters of water and 600 liters of fuel. KORALIA 3 has sailed to the Caribbean and the east coast of the USA twice and then back to Greece. She has also been to Northern Europe once to Scotland and the Scottish islands and once to the South coast of England from London to the Cornish coast.

She sleeps 8 in comfort and still has a forepeak storage locker. She has 3 individual heads each with shower and a large amount of space. Her storage space capacity is extensive both in cabins and in general boat storage. She has a very comprehensive navigation package of instruments and GPS systems. The yachts split ketch rig is an excellent cruising compromise for short-handed sailing. KORALIA 3 was raced and has a very extensive sail wardrobe, cruising and racing inventory.

KORALIA 3 has been owner-operated, as a sailing school. She would take 4-6 students and license them under the ASA licensing body. The company and school are still operating.

The yacht has been constantly updated and kept current under Llyods specifications. 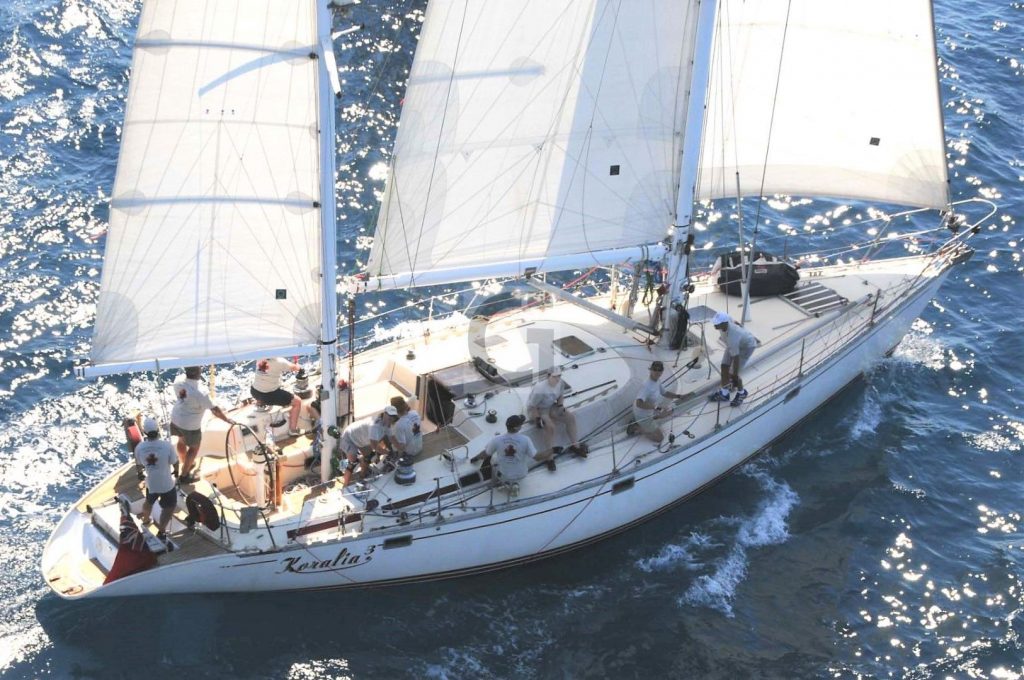