The Tiger Shark 55 is probably one of the most iconic design from Franco Harrauer. ALALUNGA IX is the second (and only existing) hull of this boat refitted from the current owner she is in his original shape ready for cruising.

ALALUNGA IX is hull number two of the two “Tiger Shark 55’s” designed by Franco Harrauer and built by Cantieri Società Aeronautica Italiana owned by Ing. Ambrosini. The boat was the result of a design experiment involving the most important naval architects of the era. The concept was born at a symposium at the Salone Nautico di Genova in 1967. With the first boat launched a year later and displayed at the Genoa show.

The Società Aeronautica Italiana (SAI) Ambrosini shipyard was opened in Passignano sul Trasimeno specifically to build the Macchi C200 fighter plane used by the Italian military during World War II. After the war the facility start using its technology and construction skills for civil aviation projects and the two yacht designs from Franco Harrauer: the Tiger Shark 55 and the Blueshark 950.

Today ALALUNGA IX is a great example of classic Franco Harrauer design and the technological experimentation found in post-war Italy. She is not only a piece of important Italian history, but a work of art in her construction and a very capable sea-going motor yacht, ideally suited to offshore sportfishing.

Refitted in 2017 and with the benefit of replacement CAT 425hp engines in 1999 (with only circa 300hrs run), ALALUNGA IX is in great shape and ready for her next owner.

The sea vocation of SAI Ambrosini was born from the seaplanes, from the light alloy processing technologies acquired in decades of aeronautical processing, which led to the construction of avant-garde racers.

Many projects were carried out by the Marine Division of the SAI Ambrosini both for civil and military use; for the private clientele many sailboats and motor boats were built and, among the first, they are unforgettable YENA – at the top of the most important IOR rankings and unharmed by the terrible storm of the 1979 Fastnet, DIDA, CARINA VON FORELE, PACIFIC, DOCTOR FAUST, EMEREAUDE II, IL MORO DI VENEZIA – entirely in light alloy, and LONGOBARDA – first maxi-yacht in carbon fibre..

Not many years have passed since February 1967 when a small group of naval architects gathered at the Genoa International Boat Show to discuss the various and complex problems of the sector in a symposium.

Today, just over three years away, the results confirm the need for the presence of the naval designer in the team of designers. These architects are specialists who know the nautical problems of life on board and navigation: they are professionals who have a particular direct construction experience, combined with a sensitivity on the knowledge of shipbuilding problems.

In fact, it is not possible to design or furnish a cabin without specific experiences, based only on an “earth” design designed for interiors that are fixed and that only an earthquake can move.

The boat is a living construction, always on the move and subject to the most varied internal and external stresses.

The “Tiger Shark” design can be considered a pure “design” experiment, in which no aesthetic concession has been made… The hull, made of Peralurnan 35 aluminium with longitudinal structure, has a very backward CC and the consequent concentration of weights (engine equipment and tanks) in the stern sectors has allowed the use of large volumes for the purpose of habitability, which has an index very high for a boat of only 13 m. of LWL.

The bridge is designed to have a minimum of 2 meters in the habitable zone and a height of aft wall compatible with the fishing needs. Furthermore, this configuration avoids interruption of the beams in the areas of greatest stress. The structure is made up of four side members that act as a base for the engines with a box keel beam.

The distinctive “nose” of the “Tiger Shark” was born as a function of three precise needs:
• The need to have a pulpit with at least three and a half meters of overhang with respect to the maximum length at the waterline
• The desire to have the maximum useful bridge area
• Possibility of arranging two anchors whose setting does not require manual intervention

These three objectives have been achieved with the study of a bow shape that also has a precise hydrodynamic function in sailing conditions with adverse sea. The engine equipment consists of two turbocharged Caterpillar D 336 A-TA diesels delivering a maximum power of 455 HP each. Axles, U-bolts, propellers and rudders are made of stainless steel. 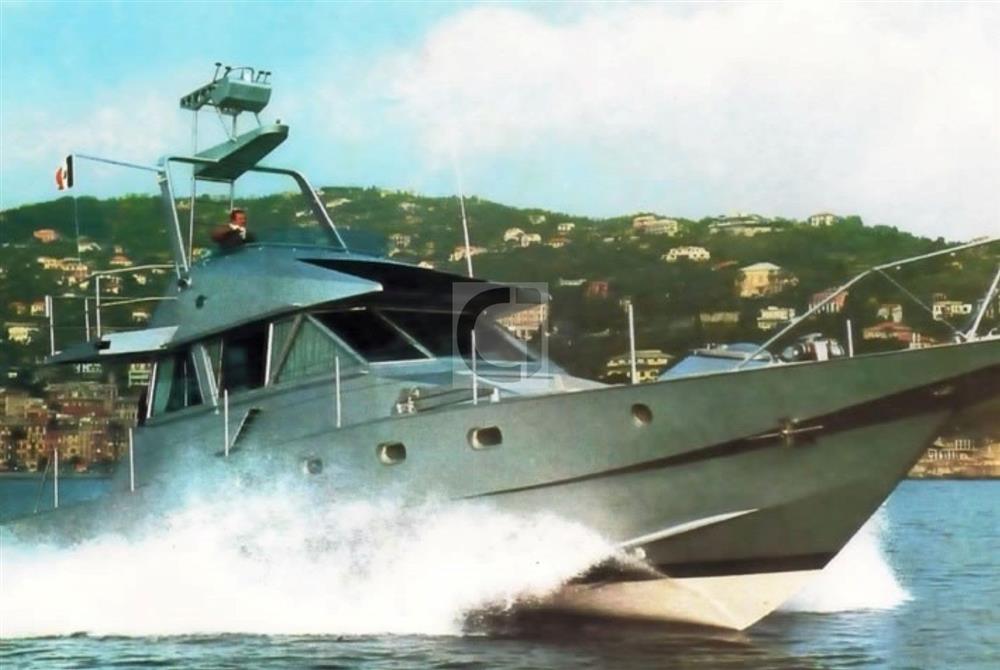 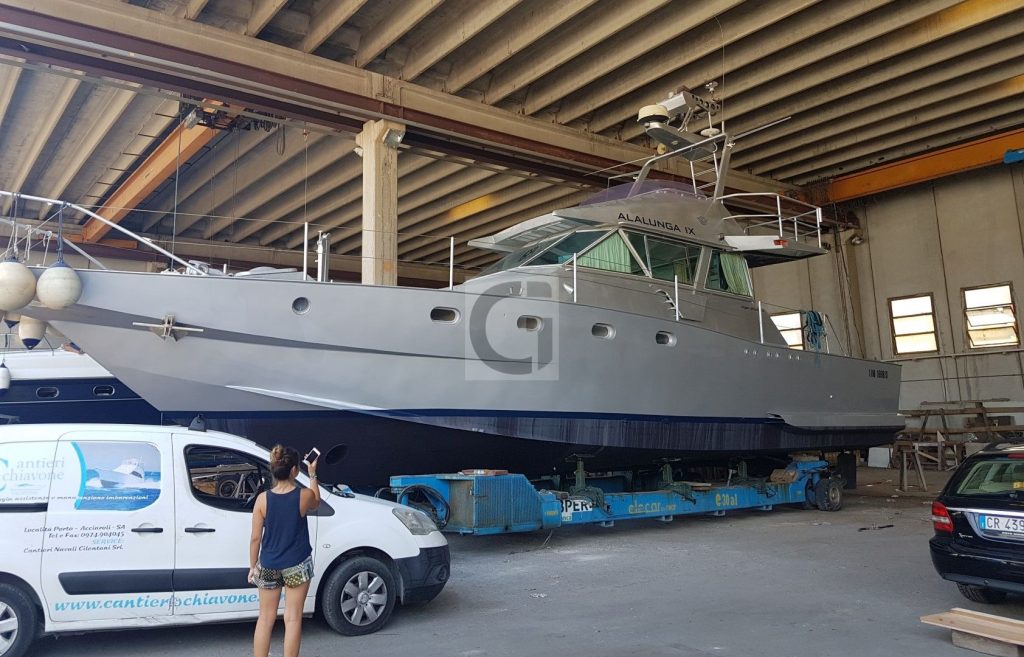