Grabau International is delighted to announce the new listing of the 1964 Sangermani 13.8m Bermudan Sloop ‘AIRELA’.

Elegant and beautiful classic design from the legendary Sangermani, shipyard in Lavagna, converted from a yawl to a sloop shortly after build in the quest for increased sailing performance. AIRELA is now looking for a new custodian to enjoy her seakindly performance.

Designed and built by Cantiere Sangermani in Lavagna in 1963 and launched in 1964, AIRELA was conceived as sistership to ‘MIO MAO’ and was converted from yawl to sloop just one year after her launch. With her new rig configuration AIRELA proved extremely competitive, winning the 2 Ton Cup in 1967 and in the Giraglia, and achieving great results in the Giraglia with a 4th in 1964, a 3rd in 1965, and a 2nd in 1966.

Following these great results, the RORC racing rules were changed which meant that AIRELA was no longer quite so competitive. Her first owner decided to sell AIRELA to one of his friends who went about transforming her into a cruising yacht, removing the small 38hp engine and fitting a larger and more reliable Aifo 70hp (later replaced with the current Airfo 70). AIRELA is still in only her second ownership, having been lovingly maintained and kept for summer cruising duties with family and friends.

AIRELA is a beautiful example of this evergreen style of high quality wooden built Sangermani design and is now offered for sale as her owner wishes to embark on a new project.

Sangermani’s boatbuilding activities began in the last years of the 19th century at Mulinetti, a village on the Riviera di Levante near Recco, not far from Genoa. Great grandfather Ettore “Dorin” Sangermano decided that he would build a boat in his workshop that “gave into the sea,” for his newborn son Cesare. At that time in Italy small-scaled sailing for pleasure did not exist and only the richest families could indulge themselves in yachting.

In 1906, Ettore won a gold medal at an important exposition, for a small sailing boat he designed and built: first official recognition of Sangermani boat building capabilities.

In 1928, Cesare and Piero Sangermani won the 5,50-metre class in the championship at Bogliasco in the speedy Vespa, which had just been completed. The many victories won by the Sangermani brothers in this yacht led to the production of other important racing boats, a tradition that continued.

From its early years the Cantieri Sangermani have been distinguished by its strategic decision not to build working boats, favoring the building of yachts.

The space available at Mulinetti became inadequate to satisfy the demands of their customers, who at the same time were commissioning larger and larger yachts, so in 1934 the Sangermani brothers decided to move the yard to Rapallo. Here, about 40 magnificent yachts were launched; notable among them being Samani I, inspiration of many subsequent motor-sailers, Santa Rita, Gipo II, and in particular the 22 meter sloop Samani II which is still sailing today and is well-known to many yachting enthusiasts.

At the beginning of the Second World War, the Sangermani brothers were once again looking for new space to enable them to expand their business. As a result of their construction skills they were called upon to run a shipyard at Riva Trigoso.

Under their leadership many vessels were completed, much larger than those they were used to build. Among these was one 40 meters long, Solaro I, which was commissioned in 1945 by the Archbishop of Genoa.

In 1946 Cesare and Piero Sangermani transferred the yard to the current location in Lavagna. During the 1950s and 1960s Sangermani’s production entered into the limelight of the international scene with the construction of several RORC (Royal Ocean Racing Club) Class III yachts.

Several magnificent boats were built for the yachting division of the Italian navy: memorable among these were Chiar di Luna, completed in 1950, and Artica II, launched in 1956, both of which had many victories in important races helping to make the name of Cantieri Sangermani well-known all over the world.

As well as the great Italian families, distinguished clients from every part of the world appreciated two characteristics that every Sangermani Yacht has in particular: they are beautiful and they go like the wind.
In particular, Gitana IV, built for the Rothschild family, was a Sangermani design which made its mark in world-class yachting at the time, winning the 1965 Fastnet Race and lowering the record by a good 11 hours to a time which at that time, remained unbeaten for many years. The 1970s were years of great developments in Italian yachting.

As a result, increasingly larger boats were built, designed by well known naval architects such as Laurent Giles, Sparkman & Stephens, John H. Illingworth, Angus Primerose, Anselmi Boretti, Reiners, Philip Rhodes, Buchanan, Alan Gurney, German Frers, Carlo Sciarelli and Gary Mull, to name only some. However, half of all boats built in the post-war period to the present day, were built according to our designs.

Cesare Sangermani Sr. was by then thought of as the “magician” of yachting. Each boat was different and everything made by hand…starting from the original tree trunk.

Victories continued when Cesare Sangermani Jr., current owner of the yard started to race. One of the most memorable was the 1971 Giraglia, when he won sailing the “Mania”, a 10,60 meter built entirely in mahogany in 1969. Journalists at the time called her “the Stradivarius of the sea”. 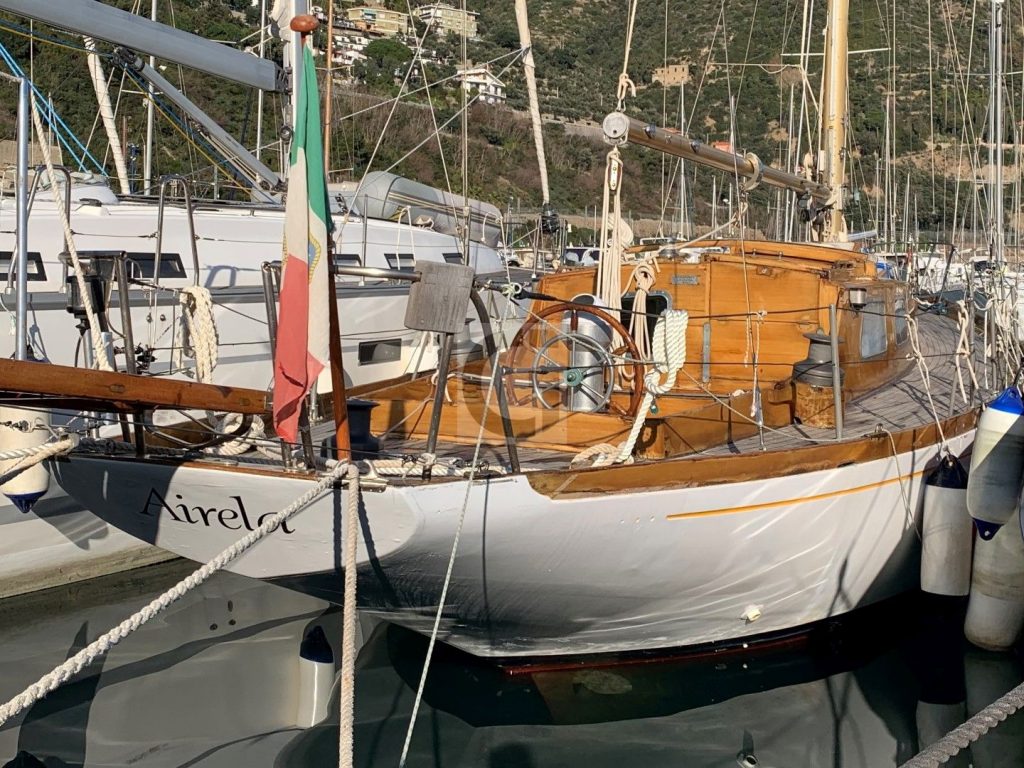