At her aft end, she boasts a large and very practical cockpit, complete, tender garage, retractable passarelle and a hydraulic hi-low bathing platform.

Spanish-flagged, coded for charter and offered for sale exclusive of VAT, CHILLI is a fantastic example of this super-stylish and beautifully-built 50-knot luxury powerboat keenly priced to attract a quick and simple sale.

Baia has a reputation as a builder of no-compromise, high-performance sportboats. The shipyard pioneered the use of Arneson drives in Europe. Indeed, sales manager Mario Borselli was taught to use them by the inventor, Howard Arneson himself. While the rest of the industry in Europe was looking suspiciously at this specialized American hardware, with its jagged propellers and bizarre, ball-jointed shafts, Baia was demonstrating that surface drives were not just a fringe technology for the leisure sector, but a practical propulsion alternative—one with exponential advantages in performance and efficiency.

In spite of its radical new looks, the Italia 70 is every inch a Baia when it comes to power and performance. The hull and deck are molded in Aramat, a tough, weight-saving Kevlar-glass hybrid. Fitted with two Caterpillar C32s rated at 1,800 hp each, the 70 nearly achieved 58 mph during our sea trial off Cannes, France, giving a firm ride in a two- to three-foot chop with more than three tons of fuel and water onboard. (Baia claims to have seen 60 mph in more favorable conditions.) Once on plane, her straight-line acceleration was nothing short of phenomenal, zipping between 23 mph and 46 mph in 15 seconds…

… The yacht’s high-quality interior was designed by Carlo Galeazzi, and apart from its bold use of an unusually pale and deeply grained wenge hardwood, along with expansive panels of moabe veneer, it is particularly noticeable for having a two-berth crew cabin as part of the main accommodation. This is found to port, on the same side as the small galley, with access from the central lobby…

… The two guest cabins, each with en suite heads, are well lit by generous side windows and deck hatches, with plenty of breathing space and headroom throughout of at least 6’4″. The forepeak VIP… with a big hanging locker on each side as well as under-berth stowage, it makes practical use of the available space…A twin cabin is on the starboard side, with en suite head access.
The layout of the master cabin is particularly successful, with a diagonally offset double berth and useful quantities of stowage space—under the berth, in drawers in the small sideboard, and in the large hanging locker to starboard…

Unusual for a vessel of this size, the soles in the forward accommodation areas are all on one level. There aren’t even any thresholds to trip over in the doorways. The same luxurious big-boat feature is also found on the main deck, which is on a single level all the way from the stern to the helm station. This is displayed to particular advantage by the layout, with its long, unimpeded central walkway, and by the amazing Plexiglas cockpit bulkhead, which is hinged along its upper edge and disappears into the hardtop. Opened up, the entire main-deck area becomes one daytime living space, with a sliding sunroof as well as opening side windows to keep everyone cool. There is a big hi-lo TV to port—you can watch it in either position—and with the three folding fabric stools deployed, the dining table seats six in comfort.

Farther aft, the cockpit opens out towards the transom, the sofas curving away on each side to accentuate the uninterrupted expanse of floor. The cockpit table can be lowered to turn the aft sofa into a sunlounging area. The way the seat back provides support on three sides makes this especially versatile and comfortable. In the stern the centre section of the transom and swim platform lifts up in one piece to reveal the tender garage, which is big enough for an 11-foot jetRIB.

Extracts from review by powerandmotoryacht.com – December 2007

With over fifty years’ experience producing high performance contemporary luxury motor yachts, Baia Yachts has firmly established itself as one of Italy’s leading companies in yacht production. Baia’s passionate attention to detail and commitment to innovation has placed the company at the forefront of many advances of yacht design over the years. Their continual efforts to improve their line has propelled Baia from their origins as a diminutive company building wooden hulled day cruisers for local buyers in Naples to an internationally recognized powerhouse producing a wide range of all-fiberglass yachts valued for their outstanding performance and luxurious accommodations.

Baia Yachts’ history begins in 1961 with Mericraft, a small facility producing wooden boats in Naples. In 1968, the company relocated to Baia, a port on the Gulf of Naples with an established seafaring tradition that provided an abundance of talented artisans. Management problems threatened the completion of a restoration project for the Capasso family, and in 1972, the Capassos purchased the shipyard and rechristened it Cantieri di Baia. The company launched their revolutionary yacht Pascià in 1997, a vessel notable for her wide round stern, fiberglass structure and hull, and elegant teak decking and interior.
1980 marked a turning point in Baia production, when the company began making boats entirely out of counter molded fiberglass. Their new motoryacht, the B81, which sat low in the water and featured an attractive line, enjoyed such popularity that the company went on to produce 106 models over the next 10 years. The 1983 launch of Baia’s new motor yacht series B50, a fast yacht with brilliant performance and elegant sleek lines that was extremely popular in the American market, propelled the company to international recognition.

Baia made the strategic decision to concentrate on the production of large-sized Open superyachts in 1986, in a move to meet rising domestic demand and spread into new markets. The company’s B80 superyacht, released six years later, was well-received by the international community; its renewed technologically advanced version Open cruiser sails the seas at 50 knots to this day. The same year the company joined the world of cabin cruisers with the production of their first 105′ Baia super yacht.

The next several decades saw Baia Yachts continuing its foray into international markets as it opened dealerships around the world. The Italian shipyard introduced several innovations to the field, including a 48′ “Coupe,” the first Convertible of the Sea, and the Italia 70, a vessel with a back door that retracted into the ceiling to create enormous open usable space on the main deck. Baia’s ongoing research and development of original technologies and materials ensures their vessels are consistently on the forefront of design. They currently produce an entire line of cruisers, cabin cruisers, fast cruisers and fast commuters ranging from 43 feet to over 100 feet that thrill with the blend of high performance and beauty that is uniquely Baia. 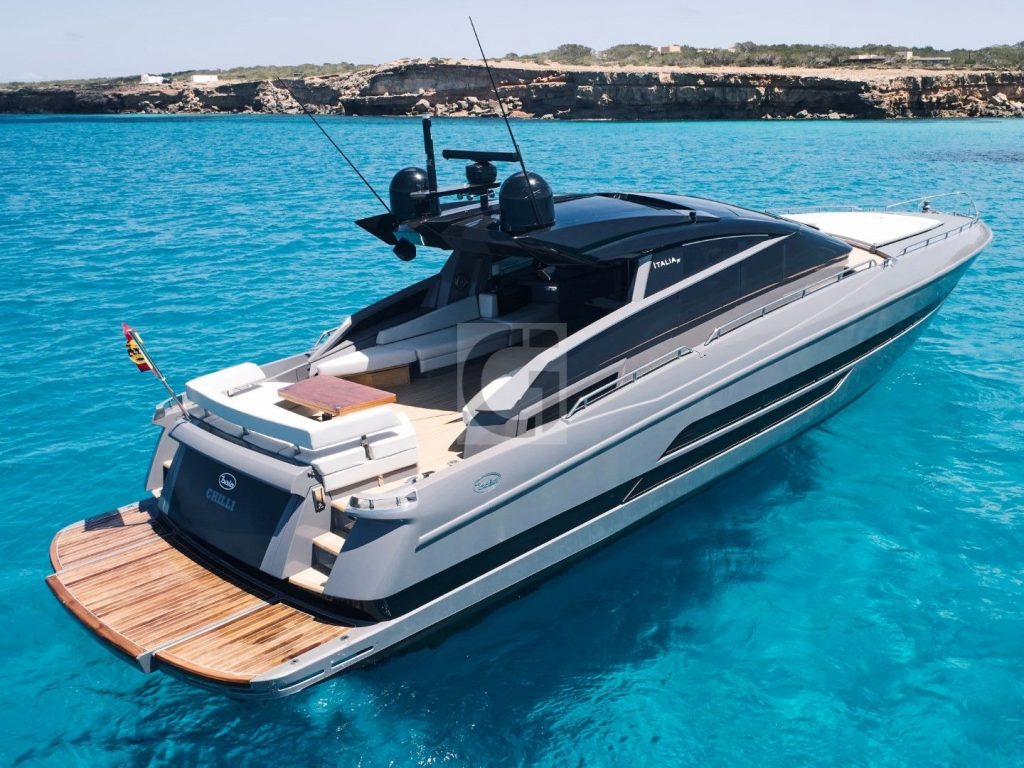