Grabau International is delighted to announce the new listing of the 2015 Dehler 46 ‘LULLABY’.

In Competition form, the Dehler 46 benefits from a performance keel with lead t-bulb which with LULLABY has been paired with Pauger carbon rig standing approx. 1m higher than standard, rod standing rigging, custom bowsprit and Elvstrom regatta sails with North Code 0 and A3 for optimum performance on all points of sail. Below decks, LULLABY boasts an elegant and beautifully finished 3-cabin, 2-heads layout, making her ideal as an easily-handled fast family cruiser as well as a potent club racer.

THE FLAGSHIP OF THE RANGE

The new Dehler 46 embodies everything that Dehler have learnt over the last 55 years. The quality of finish and level of trim leads the fleet, whilst the Dehler DNA is evident as soon as you hoist the sails.

“Effortless speed” seem to be the go to words to describe what the 46 is like under sail. Large enough to take on the oceans of the world, whilst retaining the ability to enjoy the coastline with ease – whichever coastline that might be.

STRENGTH AND SOLIDITY Being the top of the range the 46 enjoys ALL of the features and benefits that Dehler have achieved, having built over 25,000 boats. The hull is vacuum infused using epoxy based resins to achieve strength and low weight. The internal subframe structure is carbon to further stiffen without compromise and the keel is designed with a low centre of gravity to ensure this investment in technology and high tech materials is rewarded on the water.

Some scoff at the idea of a racer-cruiser or a performance-cruiser, saying the term is hopelessly nebulous. However, when you get on a boat like the Dehler 46, which points well, sails fast and also has plenty of well-apportioned accommodation space, well, what else can you call it?

Dehler is part of the Hanse Group and shares Hanse’s design firm of Judel/Vrolijk, which is known for drawing slippery hulls. Immediately noticeable is the absence of any hard chine. Instead, the Dehler 46 has flare aft, but lacks the angular and boxy look of many of today’s production boats…. A large backing plate at the keel attachment spreads the loads beyond just the keel bolts. Hull construction is comprised of a vacuum-infused cored laminate set in vinylester resin with an integrated carbon-reinforced GRP grid. The grid adds stiffness while the carbon reduces weight. A watertight bulkhead is located just aft of a large sail locker forward..

…a competition rig is available that weighs 700lb less and flies around 150ft² of additional sail area from a Pauger carbon mast and boom supported by rod rigging.

The Dehler 46’s sleek lines are enhanced by a pair of long, sloping side ports that increase the boat’s perceived overall length. As a practical matter, the ports not only open outward, but have an extended exterior Lexan cover that helps keep water out when the ports are open and creates a continuous “eyebrow” visible from the outside. All deck hatches are flush, and the cockpit coamings ramp down nicely to the deck as they run forward.
The jib tracks are well inboard, which keeps sheeting angles tight, and the chainplates are outboard with a cosmetic cover plate that allows access once removed. All the way forward, the deck is clear. An optional composite sprit is available if you want to fly an asymmetrical. Halyards and reefing lines all lead aft in under-deck conduits to Spinlock rope clutches and a pair of Lewmar winches on the cabintop.

The cockpit will work for either crewed racing or comfortable cruising. The Lewmar primaries are slightly elevated on the coamings, and there is a double-ended German mainsheet system. The traveller spans the cockpit sole just ahead of the twin wheels. A drop-leaf table with a pop-up light is bolted on the centerline. It has a stainless steel handrail that slopes down to mimic the lines of the cabintop and eyebrow. It makes a great handhold, unless you slide your hand all the way forward where the gap narrows enough to pinch your fingers. With the table removed, there is plenty of room for a full crew to move about during a race… The transom drops down manually to form a swim platform. There is also a vertical transom-mounted handle and an emergency ladder that pulls out from a cubby, which may be useful in an MOB situation.

The layout options include two or three cabins and two heads. The master suite is forward with a centerline island berth and ensuite head with shower compartment. A full guest cabin is to starboard just aft of the L-shaped galley, with its Isotherm refrigeration and Eno stove… The saloon features an efficient layout and exceptionally clean lines. Three other notable features to be aware of belowdecks: first, everything is covered or hidden, including the instrument panel by the small forward-facing nav station to port and the pop-up bottle compartment in the saloon. All the lockers match with rounded tops and movable headrest cushions reminiscent of an airliner. It’s a very clean look. Second, the doors on each of the heads can either close off the entire head or close off just the toilet, leaving the sink and vanity accessible. This innovative dual-purpose door is head-smackingly simple and useful. Finally, the finish is top notch throughout. Mahogany-colored joinery is standard, but teak and Italian oak are offered as well.

Our sail trial in San Diego presented just the kind of conditions this boat is built for. Sailing in a sporty breeze ahead of an incoming storm, we saw 12 to 18 knots true windspeed, but decided not to reef the Elvström performance sails, just for the fun of it. (Dacron sails or higher-cost fancier fully laminated racing sails are also available.) In the protected water of the bay we scooted along at 8.6 knots in 17 knots of breeze at a 45-degree apparent wind angle. Again, this boat likes to point, and we carried most of our speed right up to an AWA of about 38 degrees. As the afternoon wore on, the wind became a bit fluky, but the boat still managed an impressive 7.9 knots of boat speed on a beam reach in 13 knots of wind, falling to 6 knots at a 120-degree AWA. With Jefa steering, the helm was light even with all that canvas up and drawing, and the boat tracked well.

Auxiliary power is provided by a 53hp Volvo Penta diesel with a saildrive transmission. On flat water with 12 knots of breeze behind us and five people aboard, we managed 8.4 knots at 2,500 rpm with the standard engine spinning a Flexofold three-bladed folding propeller. With the throttle wide-open at 2,950 rpm, we eked out 8.7 knots. Tankage is more than adequate for coastal cruising with 119 gallons of water and 58 gallons of fuel.

The Dehler 46 is as close as you can get to having a viable mix of performance and comfort without really compromising either. With its fully-featured interior, this is a boat that can be enjoyed by the whole family, and when it’s time to club race or just get going, oh, what fun it is to ride 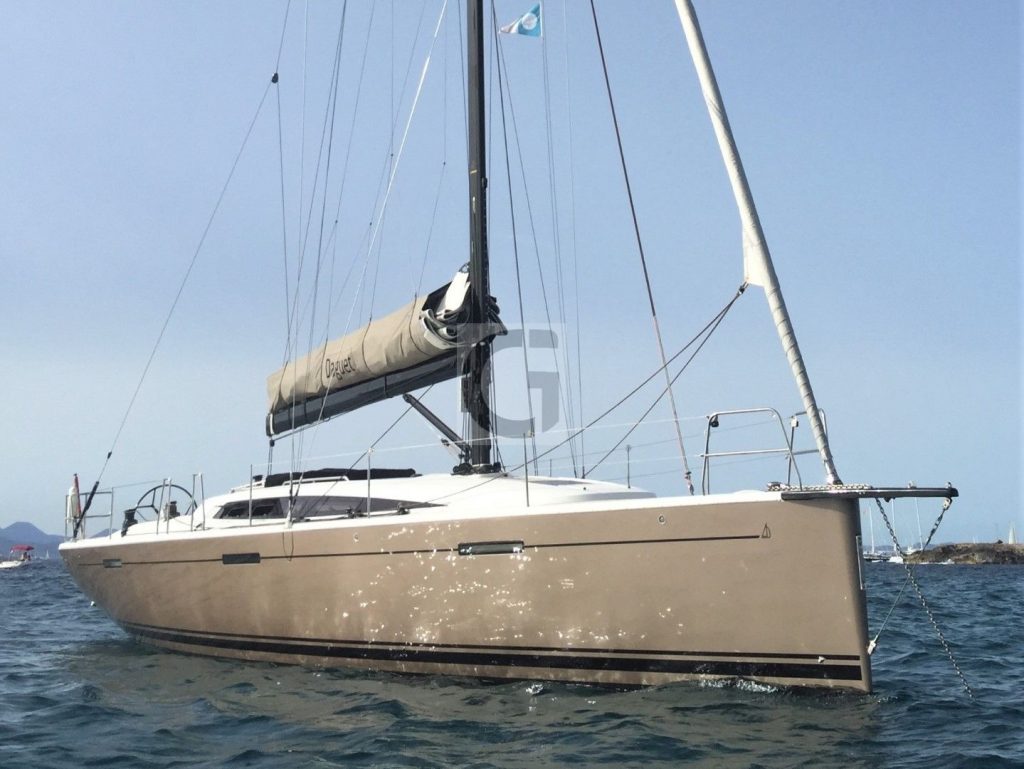