Built by the Baglietto shipyards in 1929 to designs by Vincenzo Vittorio Baglietto and sailing under ‘I-1’, LA SPINA was the first 12m to come out of Italy and was designed to the Second International Rule (design no.123). Launched to her home port of Santa Margherita , LA SPINA was later named ‘LA VESPA’ (1948) and ‘CORSARA’ (1956) she has more recently returned to her original launch name.

Completely restored and refitted, LA SPINA now offers cruising or racing opportunities for up to 12 guests (with 6 crew) and perfect racing with 10-12.

The 12 International Metre is best known as the class of yachts used in America’s Cup from 1958 to 1987 and is a rating class for sailboats that are designed to the International rule. The boats built according to this construction rule can fairly compete, while the rule leaves the freedom to choose on different design methods. The results are fast and competitive hulls offering spacious and comfortable interiors that facilitate the life on board of the crew during the regattas. The “12 Metre” does not refer to any measure of the boat while it comes from the sum of the variable included in the standard formula which construction parameters need to follow.

In 1929, Marquess Franco Spinola, a member of one of the most prominent families of Genoa and Admiral of the Military Navy, commissioned Vincenzo Vittorio Baglietto to design and build a pioneer sailing boat in Italy: the first 12 International Meters that would be named LA SPINA. For 10 years period (1929-1938), she became the flagship of the Italian Yacht Club, the first regatta club in Italy. In 1938 La Spina changed hands but continued to receive illustrious guests like the Savoia family and that was when she had a serious modification until she felt into oblivion and reached the Catalan coast. In 2007, a total restoration project began, returning La Spina to her original splendour. In February 2019, La Spina embarks on a new adventure. She moved to Barcelona with the intention of sailing again in the most prestigious regattas of the Mediterranean Classic Sailing circuit.

The restoration project was undertaken from 2005 to 2009, particularly delicate because it had to provide for both the restoration of the boat from the structure to the sailing rigging and the interior, as well as the search for the lost soul of the prestigious hull that seemed to have lost even the memory of its origins. Hence the most difficult task of facing a highly conservative but also critical restoration with the right spirit compared to the changes stratified during its almost eighty years of life. The project drawings made are many and include all aspects of the boat: the deck plan with a detailed study of all the manoeuvres, the general plans – the interior plan – which revolves around the panels and furniture, all original, the sail plan with the restoration of the original rig of the 12 International meters, the executive drawings of the mast and related hardware. The work was meticulous and went as far as drawing, to facilitate the execution of a myriad of missing details. In fact, the eyebolts on the deck, the ceiling lights, the wall lights, the fridge handles, the switches are not industrial production objects, but unique pieces created reflecting the concept of luxury expressed in the 1930s.

Even the design of the on-board uniforms was made based on research for the style of that time. The technical rooms were also considered an integral part of the furnishings, such as the kitchen which has the shelves of zinc furniture masterfully made following ancient techniques. The projects are always evolving those of restoration; this too did not stop on paper, but continued on-site, in close contact with the workers who patiently and professionally created every detail from the keel to the masthead.

Even where the work would remain invisible because it is hidden, the techniques adopted are the traditional ones, used by the Baglietto shipyards in 1929. For example, the nailing of the planks to the structure was carried out with more than 8,000 copper pins riveted from the inside; even the dovetail joints remain hidden within the corners of skylights and no eye can ever grasp and appreciate so much work. However, restoration is a cultural and conscientious act which, while recovering the object, also viscerally analyses the manufacturers’ methods and reasons. For this purpose, the relationship with the workers, their value but also the humility of knowing how to listen to the advice of the designer who leads the philosophy of restoration is fundamental. A splendid orchestra made up of shipwrights, carpenters, caulkers, equipment, mechanical workshops, and foundries. Work faced not only with fatigue and technical ability but also with the awareness of the object, no longer treated as a boat to be repaired but as an operation to save a flag of the national maritime culture.

This of La Spina is a peculiar restoration because many choices have been made in agreement with the owner, aware that the design philosophy involved the use of traditional techniques and materials: in fact, epoxy resins or paints and two-component fairings are completely absent, which tend to plasticize the appearance of the surfaces, making it too perfect. Here the natural movements of the planking in the hull must be read as an added value, not as imperfection or dilapidation.

In the construction of the skylights and hatchers, I specifically asked the workers not to finish the pieces with mechanical tools but to work the last stages with manual tools, such as the planer which is a tool now almost completely disappeared from modern carpentry. The same philosophy has also been adopted in the interiors, where even the electric cables do not try to blend in with the white of the lower deck but pass inside copper pipes that almost enhance their inevitable presence. The same applies to the structure of the hull, which exposes itself proudly between the elegant boiserie in mahogany and maple and enhances the elegance of the interiors as if to highlight the double nature of this boat: thoroughbred racing outside and luxury home in her interiors. 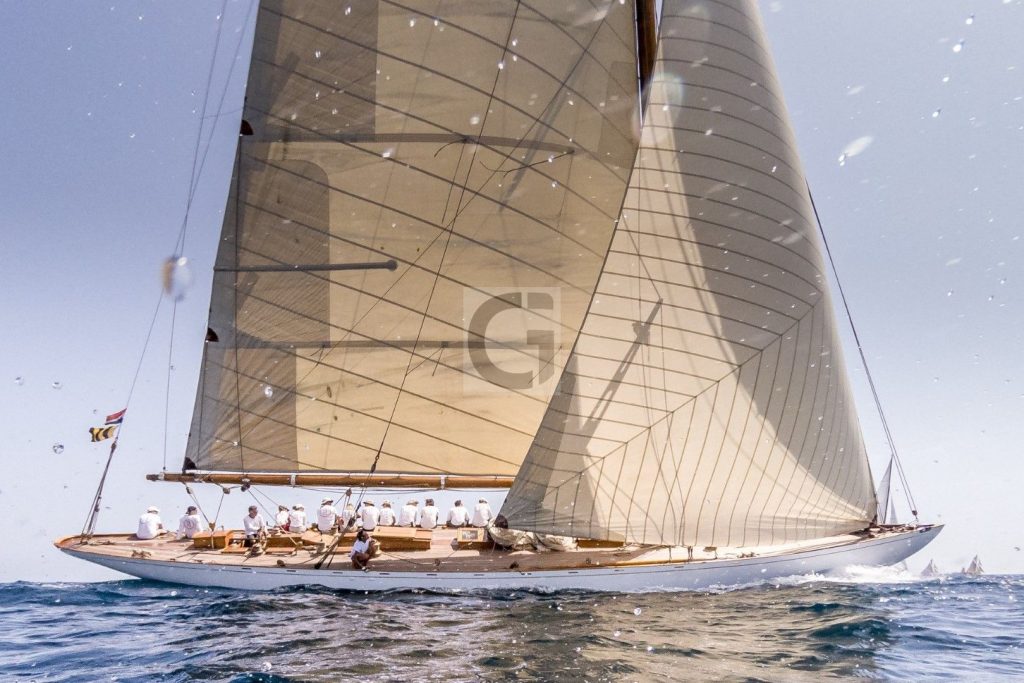