Grabau International is delighted to announce the new price reduction of the 2003 Beneteau Oceanis 473 ‘AURORA SUNRISE’.

Quite possibly the nicest presented privately-owned and used Oceanis 473 available on the market today. Truly turn-key condition and sparkling from top to bottom. Must be seen to be appreciated. British Registered.

Launched in 2003 and remaining in her original private ownership until 2019, AURORA SUNRISE has been very lightly used, never chartered and impeccably maintained. Purchased by her current English owners in Spring 2019, she benefits from a recent survey report, a copy of which is available on request. Purchased with a plan to complete an Atlantic circuit, she ultimately spent the 2019 season sailing in the Mediterranean and is now reluctantly offered for sale due to a change of plans. Following her purchase, survey items were attended to including replacement of her standing rigging and checking of all systems. She is now offered for sale in complete ‘turn-key’ condition with all extras included.

The Beneteau 473 was created by the French design firm Groupe Finot and built by Beneteau in both France and South Carolina between 2000 and 2005, making GAEL FORCE 1 a late build of this popular model. In the world of production boats a few models always stand out, and for the 130 year-old company Beneteau, the 473 is a notable model that’s much desired by cruisers who want performance, oodles of room, and a good value.

On Deck
Although considered a coastal cruiser by some, the 473 could certainly go the distance in most bluewater situations. More Beneteaus have crossed an ocean than any other brand, but of course, that could be because with its long history, Beneteau has built more hulls than any other production builder.
One differentiating feature on the 473 is its keel-stepped mast, rare on production boats today. The masthead rig with its double aft-swept spreaders also has twin backstays and a baby stay. The original genoa was spec’d at 140% for a sail plan of about 1,100 square feet. The traveller is at the companionway so there is mid-boom sheeting.

The hull is solid glass with an integral grid liner and the deck is cored with balsa. The nearly plumb bow affords a waterline length just three feet shorter than her length overall. Two drafts were available and the boat is fairly wide in the backside, carrying her beam well aft. Of course, that provides it with an exceptionally comfortable cockpit with twin wheels on either side of the walkthrough, which leads from the companionway all the way aft to the swimstep. The broad stern, however, can be somewhat pushed around by following seas.

Down Below
The large galley is to starboard and has so much countertop space you could almost lounge on it. In the two cabin version, the galley got extra space and three can work simultaneously in the area provided. The cold box is top-loading and the fridge has a side door which makes looking for that lost stick of butter easy. The twin sinks are on the centreline to drain well on either tack. A glossy interior combined with the numerous hatches and fixed ports make the interior light and bright.

The forward-facing nav station is opposite and has a well-sized desk and plenty of bulkhead space to mount instruments. The saloon itself is immense, with a U-shaped settee and bench seat to starboard that can accommodate up to seven around a large table. A slightly curved, two-seat bench is to port. Cubbies are everywhere and there’s no shortage of room for anything you’d want to take on an extended cruise.
The master stateroom forward has an island berth and a private head with electric toilet and stall shower. A second manual head is aft just ahead of the portside guest cabin, which has a bunk that could practically sleep four. While some models have a third cabin, those without it have an immense lazarette to starboard that can be accessed from the cockpit or the galley. 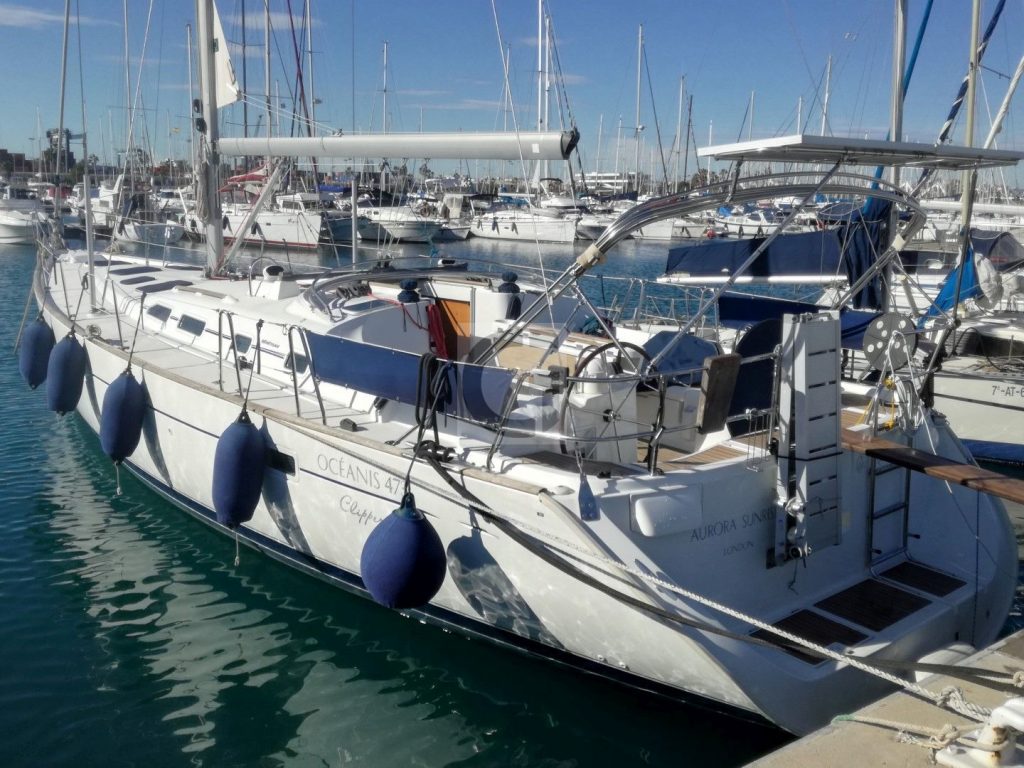