Grabau International is delighted to announce the price reduction of the 2017 B-Yachts Brenta B42 ‘JOLE 2’.

FURTHER BROKER’S COMMENTS:
Originating from the legendary Milan based Luca Brenta Yacht Design House, the German-flagged JOLE 2 was launched in 2017 and has only seen very light use throughout her short life. She offers a fantastic opportunity to purchase a very rarely available example of the Brenta B42 with a high specification and at what must be a significant saving over a similar new build B42.

The Brenta B42 was designed to provide a fast yet easily handled and stylish boat but with the ability, unlike her smaller sisterships, to also provide improved levels of stay-aboard comfort for a couple or small family. JOLE 2 has a striking performance orientated sail wardrobe by Doyle Sails which can be flown from her carbon mast comprising; a fully battened flat head mainsail, self-tacking jib on a roller furler and a gennaker. She also has additional features such as; an in-carbon boom furling system, electric Harken winches and Cariboni Power pack for the mainsail sheet, vang and traveller for that all important “push button sailing” experience. Further practical features such as a retractable Bowthruster and electric anchor windlass add to her ease of handling. Additionally, she has twin carbon steering wheels, an electric marine flush heads, grey coloured caulking to her teak deck and cockpit, metallic grey coloured topsides and cabin superstructure. Her large cockpit area provides for not only great space when under sail but also for whilst at anchor or berthed in a marina. Her specification highlights include:
• Composite carbon fibre metallic grey coloured hull.
• Teak decks with grey caulking.
• Harken electric winches.
• Carbon mast.
• Carbon boom with integrated furling system.
• Cariboni Power pack for the mainsail sheet, vang and traveller.
• Pushbutton sail controls at both steering pedestals for the Cariboni power pack.
• Twin carbon steering wheels.
• Volvo D1-30 27 hp diesel engine with low engine hours.
• Saildrive gearbox with a 2-blade folding propeller.
• Doyle Sails’ fully battened Taffetta Technora flat head mainsail.
• Doyle Sails’ Taffetta Technora self-tacking jib on a roller furler.
• Doyle Sails’ Gennaker.
• Electric anchor windlass.
• Electronics by B & G with autopilot.
• Fusion sound system with cockpit and cabin speakers.
• Galley area with a sink, gas stove and refrigerator.
• Folding carbon bathing ladder.
• Retractable mooring cleats.
• Passerelle.
• Bimini.

DESIGNER’S COMMENTS/PHILOSOPHY:
“Being amongst the major players both in term of design and boat construction … of the last 20 years of high-tech design and built boats process, this team of high professional individuals has decided to team up to propose a new breed of stylish, high performances, easy to use, semi-custom built boats blending past experiences of typical large custom projects solutions into something new. This team strongly believes in spectacular products, which necessarily needs to be supported by high technical standards both in terms of pure naval architectural thus performances and construction solutions. This is the mission. High weight stability, very generous sail plan, great cockpit comfort and pure sailing pleasure mixed with style. The simple pleasure to spend your time sailing differently.

The B42 has been conceived as a 24 hours boat opposed to the 12 hours B38. Similar cockpit spaces as the 38, larger interiors with a separate full standing head and double berth up forward.

All the rest follows the general design philosophy of her predecessor, featuring the controls at the steering systems and, amongst the option the use of composite rigging that improves stability and reduce acceleration improving sailing comfort”
Taken from the B-yachts website

“Both the self-tacking jib and the mainsail are set up with roller furling and the two self-tailing winches for halyards and control lines located to either side of the companionway are both electric-powered. Stepping aboard for the first time, it takes a moment to register that these Harken 50.2STs are in fact the only winches around the deck of the 42-footer.

Extra pairs of hands are not required once underway, either, because the boat is set up with push-button controls for hidden hydraulic systems controlling the mainsheet and traveller, boom vang and jib sheet tension. For each of these functions there is a pair of buttons, one to apply tension and the other to release it. All but the jib sheet are positioned on a console at both steering stations, while the jib controls are also within easy reach, so the person at the helm can operate the yacht without any assistance. That could mean solo sailing, but equally it could cover a boatload of family and friends, none of whom know much if anything about sailing.

Controlling the sail trim completely by button-power is a novel experience and a little unnerving when you are trying to remember which one does what (the hydraulics’ response to a command is fast enough to allow you to apply a quick touch of trial and error), but this is an aspect of push-button sailing that would soon become second nature when you spend enough time sailing the boat. And “One of the objectives is trying to minimise the time it takes to go sailing,” said Lorenzo Argento, co-founder of the Italian company Luca Brenta Yacht Design, while visiting Sydney for the initial sea trials of the two new B42s.

If the B42’s Italian dayboat looks and minimalist setup make you think “Wally Yachts”, perhaps it will come as no surprise that the B42’s designers were involved in the ground breaking early days of those bigger craft.
Brenta Yacht Design specialises in large custom craft for wealthy private owners, like Ghost, a 122ft Wally B, but over the past few years it has gone into production with the B-yacht range of semi-custom performance cruising boats, from 30 to 60ft LOA.

“We decided to go for a highly ballasted boat and made it as narrow as we could, while still with accommodation and deck space,” Argento explains. “We wanted a very balanced hull shape, because it has to be easy to drive and particularly because such a powerful boat will heel considerably, you really like to have a symmetrical hull shape so it doesn’t go ‘funny’ when it heels over, which is what more dedicated downwind boats do when they sail upwind.

“We don’t have people who sit on the rail, so you need high stability if you want sail area and power.”
The B42’s ratio of sail area to displacement is quoted as 29.9, while the displacement to waterline length figure is 108.

“The boat is not a downwind flyer as such because there is weight there,” says Argento. “We feel that people enjoy the upwind bit and if they want to sail downwind and have fun you really need to set a spinnaker and then you need people.” [The B42 does have a fractional gennaker, set from a retractable carbon bowsprit pole.]

“But here you have all these races for white sails; this is something that we don’t have in Italy. There the racing is always very serious, while here you have the serious side but also a lot of more relaxed [no-extras] racing. I think this boat is perfect for that, or just to cruise around; whatever opportunity you have.”

Lorenzo Argento says he and his design partners decided to set up production of the B-yachts only after they unsuccessfully sought a builder. “We were strong believers in this concept but nobody wanted to build these boats, so we found ourselves right in the middle of it.

“We found a builder to make the tooling and 48 boats later… nobody’s become rich but it’s a very good group of people; we have boats in Long Island [USA], boats here in Australia, in the Med, up in Denmark, Moscow, Stockholm…The owners are very specific in what they want, very demanding but also ready to pick up the technology of this boat.”

The hull is infused carbon fibre and E-glass epoxy over a Corecell foam core. “We lay all the dry fibres and then we apply the vacuum bag and by sucking the air out and the epoxy resin in, have control of the amount of resin and the weight differences between the boats is minimised,” says Argento. Built in female moulds, the use of the infusion process allows the boats to be spray-painted rather than gel coated.

The composites company High Modulus was enlisted in the challenge to maximise the usable interior volume, resulting in a single moulding keel and mast support structure. To achieve this, a finite element model of the hull, deck and internal structure was built and subjected to a variety of loads for detailed analysis.

Ballast is provided by a lead bulb on a fabricated steel blade keel.”

Do you have a yacht like this to sell? Grabau International are always looking for new high-quality yacht listings both in the UK and internationally. For further information about our tailored brokerage services, please look here or feel free to contact us. 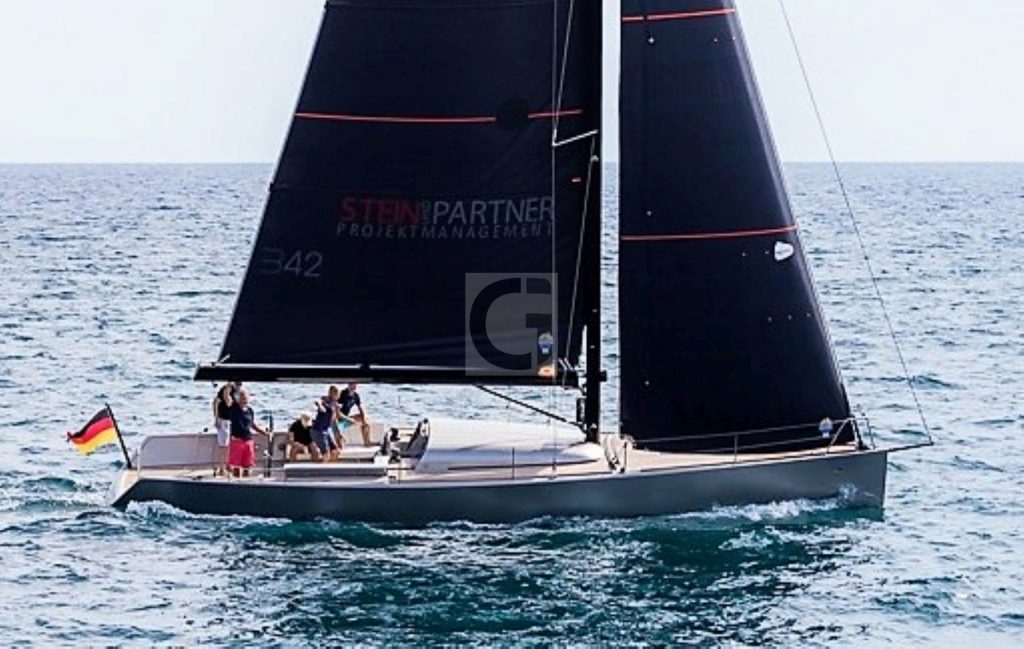